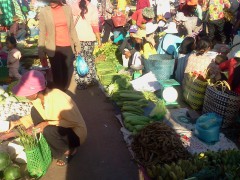 A traditional Khmer saying  “sartrey bangvil cheung kran min chum”, meaning  women cannot do anything besides moving around the kitchen,  seems no longer valid in contemporary Cambodian society, at least to a larger extent.

A quick glance at some figures can show why this is so: around 65 percent of a  total of 505,134 establishments recorded in the 2011 Cambodia Economic Census by the National Institute of Statistics (NIS) are represented by women – are female-headed in other words – while some 60 percent of persons engaged therein are female – equivalent to roughly one million women.

The saying becomes even less applicable when we look at at the employment figures in the textile and garment industry which has been a major growth driver of the Cambodian economy for more than a decade now. Official statistics of the Ministry of Commerce show that around 90 percent of labor in the textile and garment industry in Cambodia is female, equal to almost 304,000 women as of April 2012. This explicitly stresses the significant contribution Cambodian women make to the country’s economic development.

Women traders in a provincial market of Cambodia. Photo by the author (CC BY-ND 2.0)

According to an analysis in the 2007 report “Cambodia’s Garment Industry Post-ATC—Human Development Impact Assessment” of the Economic Institute of Cambodia, every direct job created by the textile and garment industry indirectly creates another job in other sectors – especially in the local trade (in agriculture products, food and clothing) and transportation sectors. Moreover, the textile and garment industries contribute around ten percent of the gross domestic product (GDP) of Cambodia, according to the NIS in its “National Account”. It is partly due to the role played by women that Cambodia has achieved higher growth rate in its GDP than other  countries in the region, especially prior to the economic crisis in late 2008.

All these facts, however, haven’t yet suceeded in bridging the gender gap in Cambodia. Female employment opportunities in Cambodia are currently highly concentrated in less skilled jobs which are highly vulnerable to external shocks like economic crises. Trade union and media sources report that some 60,000 female workers were laid off in the textile and garment industries when exports of clothing and accessories slumped in 2009. Most media reports state that while some of them decided to return to their homes to work on the land, many of these unemployed women turned to seek employment opportunities in the entertainment/service sectors which have dangerously high exposure to the flesh trade.

Women working in the  local trade sector have also shared a similar fate. Growth in the local trade sector was stunted as it was largely dependent on growth in the textile and garment industries which, as the NIS shows, experienced negative growth of nine percent in 2009. This had a bad knock-on effect on local trading activities which are mainly handled by women.

To turn to another aspect, national figures show that the Cambodian female literacy rate stood at 64.1 percent in 2010, far below the literacy rate for males of 84.7 percent. This means there were only 66 girls to every 100 boys participating in higher secondary schooling; and only 48 girls to every 100 boys at college/university level. The obvious outcome here is that even before they enter the employment market, Cambodian women are disadvantaged by having fewer, or even lower, skills than their male counterparts.

The fact that women in Cambodia have not yet attained the same level of professional skills as men is critical and an injustice that needs to be remedied. Better education is needed for Cambodian women workers to close the gender gap and make them less vulnerable to the lure of “entertainment” work.