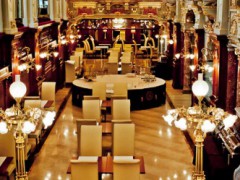 More than 20 years after the fall of the communist regime, much of Hungarian society is highly disillusioned with capitalism which once held out such a glowing promise of prosperity for all. The transition from a planned economy to Western style globalised free markets has brought some winners but they are far outweighed by the numbers of losers it has produced.

In 1989, many people hoped that long awaited political change would bring with it changes to the economy too. Hungarians looked forward to development that would give them average living standards compatible to those they saw in Vienna, a city they could visit in the 1980s during the last years of communist rule.

Yet what actually came in the wake of the communist rule was the collapse of the inefficient planned economy. For economists, this was no surprise,  they had seen the writing on the wall clearly enough. The only problem was that nobody had prepared the rest of society for the shock waves resulting from the collapse of the whole of industry.

The very logic of communism (or socialism as we called it) was the abolition of all social classes. Thus until the end of the 1980s, we cannot speak of rich or poor people in Central Europe because in a sense, the greater part of society was poor: even if you had a larger than average salary, you couldn’t spend it on luxury goods since they were none. On the other hand, everybody did enjoy some kind of security, a job that was not in danger of disappearing and a salary that could sustain – however modestly – an entire family.

In a way this was an inclusive society. Everyone was forced to languish in one poor social class, denied the opportunities of individual enterpreneurship until the very  last years of the regime.

Increasing inequalities have led to increasing number of homeless people in cities.
An image by Balázs Pivarnyik on Flickr – CC BY-NC-ND 2.0

For most Hungarians, the coming of the free market economy meant a great loss of financial and social standing. The fact that Hungary needed more than 10 years for real wages to reach 1980s levels is very telling. Only a few hardy and well-connected people could profit from these early years of capitalism that we tend to call wild capitalism. This term refers to the fact that many of the newly rich made their fortunes in deals of highly dubious legality. People like the former prime minister Ferenc Gyurcsany who used not only his talent, but also his extensive contacts to create a business empire in the 1990s. As the GINI coefficients for these years clearly demonstrate, economic growth came paired with skyrocketing inequality. Compounded by the uncertainty of the national job market in a globalized world, this has left many people bitterly disillusioned.

The New York Cafe used to be the centre of literary life in Hungary. Today with its high prices and prestige, most Hungarians simply can’t afford it any more.
An image by Ian McKenzie on Flickr – CC BY-NC-ND 2.0

Central European style capitalism did not bring inclusive growth. What it did do was to contribute to the rebirth of a small economic elite that had been wiped out under communism. But as the overall size of the cake did not grow significantly, when some people took bigger slices, others have had to settle for smaller ones.

So today if you speak about inclusive growth in this region of Europe, people tend to think that you’re either crazy or running for political office. The sad reality is that our creation of new capitalist strata of society is reaching the end of its beginning. Inclusive growth may be a very nice and appealing idea, but for us it is only a vague promise. A promise of a future that is not yet anywhere in sight.

*Thanks to Corina Murafa for helping me research this article.