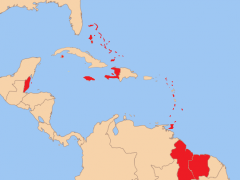 Moving from the Caribbean to Europe was an interesting experience for me. One thing that really astonished me was how integrated EU countries were. I hadn’t realized (prior to moving here) how easy it would be to move around, use the same currency and allow information to flow freely between countries and so began wondering why the Caribbean hasn’t been successful in implementing similar policies despite the existence of CARICOM, an organization established in 1973 to initiate a Caribbean integration process.

While I grew up in the Caribbean in a country that was an observer to CARICOM, as a citizen I knew very little about the functioning of the organization. In fact, it wasn’t until starting my university career in international affairs that I came to know that the Secretariat had its physical headquarters in Georgetown, Guyana. Two things that most definitely surprised me upon my arrival in the Netherlands was that people were aware of the decisions taken at EU bodies in Brussels, and the strong sense of “Europeanization” people felt despite the existence of borders between countries.

The Carribean Community (CARICOM) Treaty was signed in 1973, and was considered a significant step in the movement towards further Caribbean integration.The treaty laid foundations for a similar framework to that of European integration based on the idea that the sum of its parts would be greater than the whole. The process began with the creation of a Common Market, with a limited free trade area and limited movement of capital, but was not necessarily based on eliminating trade barriers as a whole. In 1989 the CARICOM Treaty was revised, replacing the Common Market with a “Single Market,” eliminating these trade barriers with the aim of allowing the free movement of goods, people , capital and services.

In 1992, an Inter-governmental Task Force (IGTF) was established with the purpose of further revising the treaty, and so creating a more integrated system of states. The IGTF produced nine protocols, which were later incorporated into the “Revised Treaty of Chaguaramas Establishing the Caribbean Community, including the CARICOM Single Market and Economy.” The final treaty, which emerged in 2000 called for further integration of the goals and mission of CARICOM: promoting economic integration, instituting specialized projects to assist in development initiatives, and operating a regional single market amongst its 15 members and associates. The idea of a Single Market Economy allows for the free movement of people, goods and services, the right of establishment, the common external tariff, free circulation within CARICOM states, free movement of capital, and a common trade policy.

As the annual leadership summit of the CARICOM is now set to take place in July 2013, the Secretary-General, Irwin LaRocque would be right to be  disheartened. Recently, several reporters have suggested that the end might be drawing near for CARICOM, and that reform of regional integration practices is necessary to keep the membership alive. Economic integration is a vital part of the organization, and so far, while CARICOM’s policies look good on paper, actual execution has been minimal. As is the case with many international circles, it will take more than just LaRoque and the Secretariat to get the organization to reach its full potential.

The 34th annual summit is scheduled for July in Port of Spain, Trinidad and Tobago, and it will be imperative that states put their differences aside, and look for ways to implement decisions made at these annual meetings. They need to prioritize the success of the economic union, and embody the ideas upon which it was founded. The problem is that debt-ridden economies and disputes between member states have made it difficult for the organization to do more than come up with decisions that it cannot implement. Unlike in the EU, citizens of member states of CARICOM often feel that the processes involved in decision-making at CARICOM are very far removed from their local political systems. This makes it difficult for them to trust the decisions taken by the organization as a whole and to feel like they are part of the decision-making processes.

The organization’s attempts to protect the people in member states and promote sustainable development are often challenged. Suriname challenged them in 2007, for instance, with its ambitious plans to become a member of the International Atomic Energy Agency and open its own nuclear power plant. CARICOM has in the past taken a very strong stance against nuclear energy. Ulric Trotz, a scientific advisor to CARICOM, claimed that the development of a nuclear power plant in a CARICOM territory is contrary to the organization’s stance on nuclear waste shipments accessing the Caribbean Sea. Trotz argued that the Caribbean, Suriname included, should continue to search for renewable energy sources rather than relying on nuclear energy. While Suriname did not go through with this plan, it does serve as an example of how member states self interests can conflict with policies on a supra-national level and the way these interfere with individual country’s development initiatives. In contrast, the framework of the EU has been better formulated to deal with such concerns.

CARICOM is an organization that has the potential to be a valuable asset to Caribbean states as a voting bloc in international organizations and for mutal assistance in development processes. It is a force for ensuring positive and sustainable development in the long run. Nevertheless, it is high time that CARICOM underwent reform in order to enable it to carry more weight in national decision-making. CARICOM should seek to expand its membership among other Caribbean states, and promote development in all its member states whilst ensuring the safety of citizens. In line with this, decision-making processes involved with CARICOM should be more open to citizen involvement. After all, these are our countries, and we should have an active voice in how this free market operates, the kinds of energy we use, and how we choose to protect our environments.