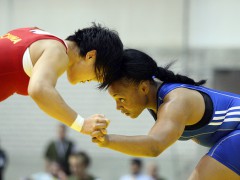 After the Olympic euphoria, London’s gigantic show has left us with mixed memories of well-rehearsed glorified races, gold medals and tears. Flags, fireworks and red sightseeing buses accompanied millions of spectators worldwide during the whole summer. Yet these fierce symbols of London’s Olympics also share another pecularity : they are all Made in China. Even the gear of the US team was produced in factories in South China which caused a public outcry in the States. With our world becoming global, it’s still very painful to deal with all the contradictions involved in welcoming the previous Olympic host to the daily landscape. Serial medal-winner China has now carved out its space on the sports fields, then has also been in the eye of the Olympic media storm. So let’s recap on the highlights of the London Olympics in China.

In complete opposition to the vision of Zhang Yimou in Bejing four years ago, Danny Boyle’s performance baffled most of the Chinese audience. According to some comments on Chinese Internet , it was  “The  most rock ’n roll opening ceremony ever” while  others complained about “how cheap” it was. The Chinese artist Ai Weiwei in a recent paper for The Guardian pointed out that:“the show was about Great Britain; it didn’t pretend to have global appeal.” Indeed, Boyle’s emphasis on the UK’s greatest talents and characters struck out in a completely different direction to China’s massive performance in 2008.

“Offensive noise pollution and a monarchical mentality have been revived as a vaudeville variety show. It was a phony scene of cultural prosperity, one that runs counter to reality.” These are not the words of some angry British journalist after watching London’s Isles of Wonder. They were in fact penned by Ai Weiwei in 2008 in his blogpost about the Beijing opening ceremony, just after he resigned from his role as lead designer of the Bird Nest – the Beijing National Stadium. Shows on such an immoderate scale will inevitably raise a strange mix of political disgust and terrible fascination that could be expressed with almost similar words.

If the Olympics are the time for athletes to show off their skills, they are also a moment for journalists to do their very best. Editorial track-and-field is also a full-time discipline where all opponents compete on the global stage to dollop out the right amount of surprises at the right time. The controversy about the performance of Ye Shiwen, the Chinese teenage swimming prodigy, was a great occasion for a round of  “word wrestling”. After her second gold medal in a row, journalists started to echo the US coach’s “worries”, asking her if she really did take dope (note here the interesting method of investigation). The Chinese press agency immediately riposted with an article wondering why on earth “foreign” journalists ask this only about a 17 year-old Chinese woman when there have been so many other athletes winning two or three gold medals. Seeing Chinese official newspapers barking about how “Great China” is being insulted by foreign journalists is not surprising, but it always leads to long and sterile debates online where exacerbated nationalism always finally wins the day over the bitter humor of Chinese netizens and their reflections on topics like gruelling training programs for children in China.

The other great drama in China has been the injury of Liu Xiang, the young 110-meter hurdles world champion during his first-round heats. Already injured during the Beijing Olympics, he was one of the very few representing China in the track-and-field disciplines. When the Chinese commentator saw him on the ground, he just broke into tears calling for some justice. (A moving reaction from this commentator that should surely earn him an award for his dedication to sports coverage, as well as for his commitment to ham acting). Indeed, few days after China Central TV‘s Olympic tearful commentary, it was admitted in the columns of the Oriental Guardian that the whole thing has been scripted hours before the drama when they first learnt about the injury. Once again, millions of Chinese netizens let flow their hate against the big media setup in which we all live.

When financial predictions turn out right

Another well-known sport that always causes tension is the famous sport of predicting the medals count. Here again, China has corrected their first strategy, lowering their predictions just before the event. This wouldn’t have occurred if they had been using the rigorous science of statistics to forecast the numbers of medals. In this field, the winner is the famous investment firm Goldman Sachs. In their preliminary report about the  Olympic’s financial impact, analysts José Ursúa and Kamakshya Trivedi actually cooked up an algorithm based on previous Olympic performances and economic growth to second guess the number of medals, successfully for many countries, it turns out.

In 2008 Ai Weiwei told the German magazine  Spiegel that, “The Olympics are now a propaganda show” that has been “beholden to the wishes of various commercial operations, which in turn shape our understanding of the event and of the world”. Indeed, its programmatic character makes it one of the most suspenseful  – and unsurprising!! –  spectacles in the world.