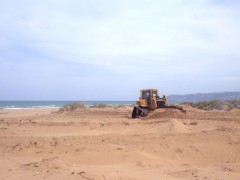 During the 2010 Deutsche Welle Global Media Forum I attended a workshop on how the media deal with topics related to climate change. It was entitled “Climate change and the Media: Coverage Vs Advocacy” and I find it worth commenting on, especially in the context of the FC_org content package on “Democracy’s Green Challenge”. It follows on from my previous article on “Democracy’s Green Challenges as seen from Morocco“.

The workshop raised an important question about what weight the media should give to the opinions of “climate change skeptics” when it comes to coverage of climate change. This question deserves close examination as it is intimately linked with the topics raised in Democracy’s Green Challenge and also has a strong bearing on issues of media independence, as will now be shown.

In my first response to the lead article by Ulrike Reinhard, I focused on the question she raised of “whether democracies are more climate-friendly than dictatorships” and mentioned the very critical role the media plays in the equation. On the basis of ideas developed in the workshop on Climate Change and the Media”, this post will give a detailed account of the  role of the media.

The workshop was hosted by the JÜLICH RESEARCH CENTER and brought together the following participants: Maxwell Boykoff, of the faculty of environmental studies at the University of Colorado U.S; Alex Kirby, former BBC journalist for environment topics and consultant to the Climate Change Media Partnership, U.K and; Irene Quaile-Kersken, journalist at Deutsche Welle, Germany. It was moderated by Prof. Hans-Peter Peters, senior researcher at Jülich Research Center in Germany. A detailled report can be found in the Deutsche-Welle Global Media Forum archive.

The first point we should mention is the comparison often made between coverage of climate change issues and coverage of human rights issues by mainstream media.

Such analogies were repeatedly made in the discussion following the workshop. Yet in my own view as a blogger on sustainable development issues in Morocco, such analogies are erroneous:

– On the one hand we cannot claim that “climate change skeptics” should be considered as “bad” or as equivalent to dictators. They express a point of view which is controversial but not necessarily harmful: one cannot compare them to a polluting industrial group.

– On the other, unlike human rights, climate change issues can be dealt with by using academic standards. The media should not over- or underrepresent one point of view but should be bound by scientific objectivity. The principle of peer recognition works very well here, and from this angle it seems that the climate skeptics are already overrepresented in the media when we consider the low spread their views have in the scientific community.

This photo taken by the 'esco' NGO in north eastern Morocco shows sand plundering on a very sensitive biological site. It is emblematic of the coverage made by advocates that would not be automatically broadcast by the media

Principle 15 of the Rio Declaration states:

“In order to protect the environment, the precautionary approach shall be widely applied by States according to their capabilities. Where there are threats of serious or irreversible damage, lack of full scientific certainty shall not be used as a reason for postponing cost-effective measures to prevent environmental degradation.”

This gave birth to the famous “precautionary principle” or the “precautionary approach” which states that if an action or policy risks causing harm to the public or the environment, in the absence of a scientific consensus that it actually is harmful, the burden of proof that it is not harmful falls on those taking the action (namely: policy makers). This principle is statutory in some legal systems like the one in place in the European Union.

In terms of the media, stating that coverage should be given to “climate skeptics” independently of their real weight in the scientific community goes against the grain of the precautionary principle: a media show of distrust to the skeptical point of view cannot be criticized as “advocacy” or a lack of neutrality. The error is to consider such views as ‘outsiders’ in need of more coverage than what they actually represent. This is the only application I can see of the precautionary principle to media and climate change, otherwise I would consider it as a principle of public policy with no applicability to media.

Far from elitist discussions on global climate change, let us consider the case of a local ecological disaster –  pollution of the river Moulouya as presented in my previous article. Happening in August 2011 when Morocco has just adopted its “post-Arab-Spring” constitution, this catastrophe proved that the equation “democracy <-> sustainable development” cannot be resolved without mastering the “media” parameter.

Indeed, in Morocco, the mainstream media scene is dominated either by state controlled media or by private media financially dependant on advertising by industrial groups. Both these groups played a biased role as they dismissed public opinion about the causes of the pollution that totally wiped out the fish population.

In this case, providing a platform to NGOs is not about “advocacy” but just a simple matter of media neutrality. It shows how opposing “coverage” to “advocacy” can be very harmful to normal coverage. Talking about such environmental issues as the pollution of the river is considered as  advocacy or a non-neutral point of view, and thus is avoided by the media.

From the point of view of the advocates, citizen media and advocacy-media would have no reason to exist if the mainstream media were not subject to the influence of economic and political actors.

As Saint Exupéry once said: “We do not inherit the earth from our ancestors, we borrow it from our children”. The precautionary principle should guide public policymaking while the mainstream media should not consider awareness raising or precautionary speeches as advocacy. Broadcasting should be based on facts and neutrality. One of the main Green Challenges for Democracy is to provide equitable access to the media for climate advocates and scientists alike, and at the same time to protect citizens from nonfactual and misleading propaganda –  be it from industrial lobbys or extremist advocates of environmental issues.