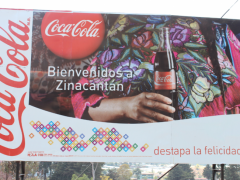 We know we’re living in a globalized world when we realize we’re able to go to our local grocery store and find food from every continent or when our need for news can access any publication anywhere in the world in seconds. But you also know it when you find yourself in a remote town in a remote country and it’s still easy to get a Coca-cola from the nearest store.

International trade continues to thrive as an important part of our connected world. The Coca-Cola Company is one of the leading multinational corporations that has reached out across social classes and geographic boarders to markets otherwise untouched by most facets of globalization. In rural Mexico small indigenous communities have not only been introduced to Coca-Cola as a new beverage of choice, but have also incorporated this branded drink into their traditional rituals.

I recently visited the Mayan community of San Juan Chamula which is about a 20 minute drive from the well-known southern Mexican town of San Cristobal de las Casas. It’s easy to recognize “Chamulas” from other indigenous groups because of their peculiar way of dressing: the men wear black or white furry wool vests and the women dress in embroidered blouses made of colourful satin, and long black wool skirts.

What is this ritual all about?

Entering the church of San Juan Chamula is like entering another world. Statues of saints line the walls flanked by mirrors. The floor of the church is covered in pine needles.  The atmosphere feels somehow mystical as the smoke of “copal” resin from tropical trees used in religious ceremonies by the cultures of pre-Columbian Mesoamerica fills the air.

One of the most impressive aspects of being inside the church are the hundreds of thin, white, lit candles in front of various men and women of all ages kneeling and praying in Mayan. There are no benches, and they pray on the floor in a sort of trance. Visitors are welcome to observe the prayer rituals, but it’s forbidden to take photos inside the church.

As you get closer to the altar of the temple, you see that the cleansing rituals taking place there include the use of soda (usually any beverage of the Coca-cola family). The healers or shamans also use animals, mostly chickens which they rub all over the body of the sick person wanting to be cured. The purpose of the animals and the soda is to drive the evil spirits out of the body of the sick person.  After drinking the soda, burping comes along as a by-product of the fizzy refreshment; Chamulas believe that this eliminates all sins and purifies the soul.

Around 12% of the world’s production of Coca-Cola goes to Mexico, making Mexico the world’s number one Coca-Cola consuming nation. Unsurprisingly then, Mexico also suffers the highest percentage of overweight adults, a peak of 70% of the population according to the OECD.

The rising ‘coca-colization of diets’ — as Olivier De Schutter, UN Special Rapporteur on the Right to Food, calls it — in Mexico might have as much to do with economics and availability as the refreshing taste of a nice cold soda. 12 million people in Mexico have no access to piped water and 32 million have no access to proper sewage. Coca-cola still replaces water on many tables, not merely because it’s cheaper, but because it might also be easier to get.

Are corporations transgressing indigenous cultures and encouraging product consumption by blending it with indigenous traditional healing ideology? Or are multinationals becoming a part of these cultures natural history and evolution?

Globalization puts an end to our national and ideological borders. The cultural patterns that have emerged in Chiapas are repeated in remote Asian and African indigenous cultures. They show the creation of a culture with global features, such as the use of Coca-Cola in contemporary Mayan beliefs. We witness nations influencing one another in many cultural ways, and certainly major powers exert a great influence in smaller communities.

In southern Mexico the combination of poverty, high levels of malnutrition and elevated levels of soda consumption has brought a marked change to traditional diets. The use of Coca-cola in the everyday life of indigenous communities ruptures romantic visions of a pure native community untouched by globalization.

People outside the native community experience a definite cultural shock as they observe the ritualized use of corporate products – like Coca-Cola. Yet even though there might be widespread condemnation of such uses for the products of international corporations, at the end of the day this is just an inevitable aspect of our contemporary globalized world.