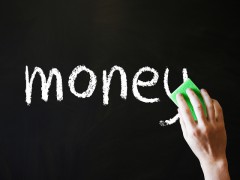 Do you have what it takes to have it all?
Image by: Images_of_Money on Flickr (CC BY-SA 2.0)

Money is the root of all evil. This statement is as true today as it was some years ago. The world’s economy is suffering and Pakistan is on the high road to the next economic depression. Maybe we will be the first to suffer as the MIT predicts that the world economy will collapse by 2030. Yet with higher unemployment and rising numbers of specialized personnel in Pakistan, people with a Masters degree in business administration are working as waiters in local cafes for less than 150 dollars a month while the average annual wage in Pakistan hovers around the  1000 dollar mark. With the few opportunities Pakistan has to offer, these specialized people, who have spent hundreds of thousands of rupees on their education, can easily suffer from chronic depression and or turn to crime. Growing power shortages, lack of foreign investment, and high inflation have all turned Pakistan into a battle ground.

This battle ground is not only fielded by the unemployed. It also includes  manipulative politicians, corrupt officials, and the struggling and increasing lower middle class of Pakistan. And it  is rife with oppressive cultural and religious ideologies that prevent progress and seduce the hopeless and the lost.

But the question is whose fault is it? If you ask any person on the streets of Lahore about the parasitic economic problems and unemployment problems Pakistan is suffering from, they would probably blame either their fate or the lawmakers or President Zardari. Some would even go as far as to blame the United States and India for conspiring in the economic and social downfall of Pakistan. Is this logical? No, I do not think so. But for the masses this has become the reality. Politicians blame foreigners for their personal shortcomings as leaders and religious leaders blame the government. The people are lost somewhere in between without any control over their thoughts,  acting like puppets in the hands of their masters. All these problems are here only because we have created them. We Pakistanis are the ones who bear the sole responsiblity. Not the politicians , not the leaders but the general public, each and every single Pakistani.

According to the International Monetary Fund Pakistan’s unemployment rate is around 6%. This surely does not seem very high –  but would you consider a person who only earns 50$ dollars a month and can hardly feed his family of three an employed professional? It cannot be emphasized too much that over the years specialized jobs have become simple jobs. Repairing a phone 20 years ago might have required specialized engineering skills but nowadays simple technicians can do exactly the same job for one-tenth the price. Many people have lost their jobs for this reason or are earning less than they would have twenty years ago. User-friendly machines have made work easier but they have also taken away jobs by enabling employers to hire unskilled technicians to run them. Previously engineers were hired to drive trains, now a simple technician can do that. The world has made information cheaper but it also has cheapened the value of skills.

The education sector of Pakistan is a prosperous private industry. Yes, it has become a very popular local industry, a way of generating income from the blindfolded masses of Pakistan. Our government unfortunately does not like spending too much on education because weapons are much more important than progressive skilled children, not forgetting that it also serves to induce oppressive ideologies in the children. However, private education institutions have led us to believe that we all need to come to them to be enlightened and learned because they are simply better. With the boom in various universities, expensive medical colleges, and private engineering institutes, we have a very large skilled force but we surely do not have the jobs for them. And by skilled force I do not mean entrepreneurs or innovators. These universities may be expensive but they create a skilled workforce which is more a follower than a leader, these are people who look for jobs rather than creating them.

With the current set-up in industry, there is an increased need for qualified workers who do not just have college degrees but have a sense of style and are fluent in English and communications. Isn’t it weird that in a country with Urdu as its national language, English is considered even more important? If you have acquired your basic education in a government institution, where English has just recently been introduced as an educational medium, you are at a disadvantage. A distinction of birth. Is it fair that you have worked twice as hard to get where you are but the corporations still don’t consider you good enough to represent them? But it’s not entirely their fault because retailing is very largely dependent on consumers’ perceptions.

Many who can afford to emigrate to some  stable and developed country don’t hesitate for a second. Even our government urges them to do so.  As  our ex prime minister Yousaf Raza Gillani  famously said, “Why don’t they just leave then”. “Who’s stopping them?” when told that one fifth of the people in Pakistan want to leave the country.

But for the majority of graduates the reality is much harsher. Competition is tougher, corruption is prevalent and connections with VIPs are essential. This ought to leave any person in such a quandry feeling very frustrated. And if society is said to be the sum of its individuals, then every person out there working at a job knowing that they deserve better than this, makes for a very frustrated and unstable society.

With the rise in frustrated youth looking for employment, there has been a rise in people’s readiness to accept terrorism. J for Jobs is turning into J for Jihad. If these people can be brainwashed by the broken dream of success which has left them downtrodden and depressed, why can’t they be brainwashed to believe that they can serve a greater purpose than themselves and be made to do anything. Play with their death instinct and you get a suicide bomber.

“Love thy neighbor” has now become “Do better than thy neighbor” for most of the people. Enough is just not sufficient for most of them. Though this is good in the sense that it generates competition, we should not forget that this is also the basis on which greed and corruption flourish. No wonder corruption is rampant when I can easily get a driving license without a test just by giving that little extra tip. With the failing economy we have now, enough can never be sufficient anymore because maybe we are not distributing the wealth properly.

All of this, the general sadness of the world, Weltschmerz or world-pain as the Germans say, has given rise to a society where the law of the jungle prevails – where only the fittest survive. If this continues, society is very much in danger of imploding under its own weight.