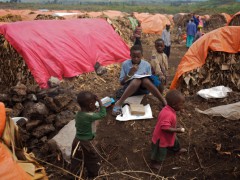 A future without fear: is there hope for the DRC? Endre Vestvik via Flickr

If civil-society struggles persist, the DRC will continue to fall short of its vast economic potential.

Philip Gourevitch, author and journalist, once wrote: “Oh Congo, what a wreck. It hurts to look and listen. It hurts to turn away.” In three sentences he seems sums up the general feeling of the international community towards the Democratic Republic of the Congo.

The international media has mostly lost interest. How do you cover a war that involves at least twenty different rebel groups and the armies of nine countries, that does not have a clear incentive or objective? How do you put a human face on five million victims that die unsensationally as a result of disease or lack of aid?

The DRC’s great potential makes its current state particularly sad: it is the second largest country in Africa, with great biodiversity and immense economic resources. Yet it is one of the world’s poorest nations, currently ranking 2nd in the Failed States Index, with an estimated 4,500 deaths per month and an unequalled record of mass rape and child soldiers.

The Congolese population has been subjected to exploitation since 1870: first by the Belgian King Leopold, then by the Belgian state and since 1960 by a series of oppressive and exploitative dictators.

The internal struggle was amplified by the Rwandan genocide in 1994 when armed Hutu militias entered the Congo together with over 800,000 Rwandans fleeing the Tutsi Rwandese Patriotic Front. From Eastern DRC, Hutu militias frequently launched attacks into their home country. Motivated by securing their borders, as well as bringing Hutu- militias to justice for their role in the genocide, Rwandan and Ugandan troops deployed 20,000 troops in the Congo, marking the onset of “the first African World War”.  Fighting was fuelled by the DRC’s vast mineral wealth, with all sides taking advantage of the anarchy to plunder its natural resources.

The state itself is a source of insecurity for civilians. Institutions are weak and the current president, Joseph Kabila, is accused of wide scale corruption. The formal economy has virtually collapsed, infrastructure is in a state of total decay and it is said that it is easier to start a rebellion than a business in the Congo. Though it is one of the richest countries in resources, the average yearly wage is US$365, making it the poorest country in the world. Within the government, salaries range from less than US$100 per month to monthly bonuses of several thousand dollars, making officials conveniently dependent on the presidency.

Kabila’s regime has undermined the independence of the judicial branch by running a politically-biased anti-corruption campaign. It has used money and coercion to eliminate challenges to its authority and to fight local rebellions. In order to put down an uprising in Bas-Congo in 2009, rather than negotiating a peace agreement, Kabila reacted with disproportionate force: hundreds of civilians died, some brutally dismembered.

Currently serving his second term of office, Kabila is officially barred by the constitution to run a third time. The International Crisis Group reports that Kabila is already contemplating amending the constitution under the pretext of addressing difficulties in implementing decentralisation. Concentrating more power at the presidential level will further weaken already feeble state institutions and is likely to result in removing the two-term bar on presidency. As Kabila fears prosecution for crimes against humanity by the International Criminal Court just as much as potential assassination, he will try to avoid losing diplomatic immunity at any costs.

There has been little pressure on rulers in the Congo to create strong state institutions. Militarily, they have relied on outside help to keep rebel groups in check whilst profiting from exploiting weak bureaucracies. In fact, there isn’t any incentive for them to create a strong administration: revenues came from foreign companies exploiting the DRC’s resources.

Whilst it is safe to say the DRC has failed as a state, Congolese society has not failed. On the contrary, it is strong, vibrant, dynamic, and resourceful. Women form rotating credit systems to compensate for the absence of an accessible banking system and farmers cooperate to hire transport to get their goods to markets.

Reconstruction efforts thus far have focused too much on supporting the national government. To avoid a future for the DRC as morose as its past, the focus of international development efforts should be on re-strengthening civil society and ensuring it is heard by DRC’s national government.

Ira Sereny is a member of Global21, a student network of international affairs magazines and a partner of FutureChallenges. A longer version of this article was first published in The Oxonian Globalist.