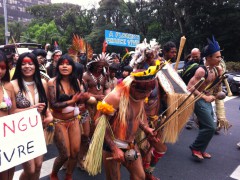 Every culture or tradition is an invention, the famous English historian Eric J Hobsbawm once said, so it’s impossible to talk about a “pure” culture, a culture free of the influence of outside cultures or foreign individuals.

One cannot imagine “British” culture without the strong influence of Indians, Pakistanis, American blacks, Africans and other people from all over the world. Brazilian culture is not only heavily influenced by people from Europe, Africa and even Asia, its very foundations are built on such influences. In Brazil we have one of the world’s biggest Japanese and Chinese diasporas, as well as the biggest Portuguese one. Italians, Spanish and even Arabs are an important part of Brazilian culture, of what Brazil actually is.

You can still tell the difference between two different cultures such as the Spanish and the Arab, no matter how influenced they are by one another, and it isn´t much different in Brazil. You can still identify their specific aspects and characteristics.

What would Brazil and its traditions be if the Europeans, Africans and Asians hadn’t contributed over the centuries to “creating” what today we call “Brazilian culture”? During the Middle Ages Spain felt all these different influences that shaped and reinvented its traditions, while today various waves of immigrants are changing it again in a constant historical movement.

And the same is happening all over the world, even within the smallest tribes when they come in contact with neighboring tribes and end up being influenced culturally by the “other”. Cultures are a mix or mash-up of different cultural sources and it is virtually impossible to change this.

The current discussion over keeping the “purity” of cultures, specially debate from the right-wing is to put in simply – absolute nonsense. In Brazil there are attempts to regulate the way we write and speak that enjoin us to avoid “foreign influences” to our language. This is plainly ridiculous, considerng that all languages are alive and change on a daily basis, and that Brazilian Portuguese itself is far from “pure”, but a bastard mix resulting from hundreds of years of development, change and amalgamation.

Yet the debate over the rapidity of cultural change driven by the growth of commerce and transportation, tourism, immigration but also by the internet – everything that can labeled as “globalisation” – is an important subject that is very much in keeping with the spirit of the times.

Of course all of this doesn’t come without costs, conflicts and problems. Immigration for many countries is a problem to be solved in the worst way possible. Economic-driven migrants aren’t usually welcomed and their cultures are often deemed as inferior – as if such a thing existed – and richer countries tend to impose barriers, even physical ones. Some countries make the lives of immigrants a living hell, making it hard for them to get citizenship, work, have good housing conditions, access to healthcare and etc., and sometimes immigrants even face prison and deportation.

Even in developing countries such as Brazil, where we face labour shortages in many areas, migrants from Bolivia, for instance, may face terrible labour conditions, sometimes working as slaves in the middle of one of the biggest cities in the world, São Paulo, simply as a matter of survival.

Immigrants are a reality, but not a new one. What is different is the quantity and maybe the size of some diasporas, so it is important to understand their dynamics and be able to insert them into society and let time do its trick of amalgamating different cultures. And one must keep in mind that what we today call “economic-driven migration” isn’t new at all. For ages, people have moved from one place to another in search of better conditions of work, housing, and a better life.

That’s what makes cultures so rich, these contacts, shifts, and developments and the ability cultures have to renew themselves from time to time. The combination of elements from the legacy resident culture with new cultures makes for cultural renewal. In Brazil people say we have the best pizzas in the world, and ‘course everybody knows that pizza originally comes from Italy but the recipe came to Brazil during mass waves of migration at the beggining of the 20th century where it was influenced by the many cultures here that had already taken root.

Economic-driven migrants are just like any other kind of migrants and actually they are the most common type. If you go to a different country, you’ll probably need to work in order to support yourself and, while doing this, you’ll not only influence a country’s culture, but also the  the labour market, the corporate culture.

With the internet, sometimes we don’t even need immigrants for the culture to change rapidly. A local can just adopt something he or she sees online and when a significant group does the same… there you go! Corporate culture is the same, you don’t even have to move to another country in order to influence and be influenced by another culture, it just happens.

Cultures are like languages, one can try to stop their natural course of development and shifts, but the truth is that nothing can be done in a long term to avoid new generations from creating new terms,  new slangs, new ideas, and shifting the culture as we know it.

The bottom line is that cultures are ALWAYS changing, which means that globalisation, the global economy or whatever you want to call it, won’t “destroy” any culture, won’t alter identities in any “new” way. One can say that changes are being made more rapidly, and that’s true: the Internet, tourism and waves of mass migration are changing cultures faster than ever, but cultures change anyway. The only big difference nowadays is that the rate of cultural change is faster which means that it can seem a bit more scary.