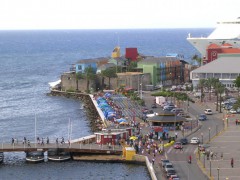 Growing up in Curacao, I always found watching the news to be disheartening. It was difficult to see various countries, both bigger and smaller than Curacao, be represented in international forums like the UN, WTO and CARICOM, while trying to understand why Curacao was not. As I began to learn more about Curacao’s status and with changes to its political identity in 2010 projected to increase the island’s autonomy, I hoped that our semi-autonomous status, would lead the island becoming more involved in the international arena. At a crossroads, the island now finds itself facing a predicament: on the one hand, economic and political exclusion from the international economic platforms prevent Curacao from ensuring that its interests are adequately represented in inter-governmental organizations despite its dependence on imported goods, while the consequences of breaking ties with the Netherlands to become completely independent could inhibit an island whose economic future is ridden by uncertainty.

As a semi-autonomous territory within the Kingdom of the Netherlands, Curacao is independent in making decisions based on its domestic law, however still depending on the Dutch for economic support to implement domestic policies when necessary. While I and several like me are grateful for the Dutch financial assistance, there are deep structural inequalities entrenched in this post-colonial relationship. In line with this, things in Curacao are far from perfect: the government is ridden by corruption and bribery; internal economic inequalities have caused an increase in crime rates; and the lack of tourism has put the country in a convoluted economic state with an uncertain future.

A view of Riffort and the downtown area of Curacao from a ship. Rober Wollstadt in Flickr. CC BY-SA 2.0.

The lack of Curacaoan involvement in various economic platforms nevertheless does not help the situation: most of the island’s debts are owed to the Netherlands, and as it cannot act independently it cannot seek aid from the IMF or the World Bank. Given the post-colonial reality, accountability to the Dutch is a social dilemma: it is common sentiment that the Dutch are indebted to the island as they often used it for their own gains in the past. An example of this is the use of the island as a hub for the Caribbean and Latin American slave trade without adequate reimbursement. A lack of lending accountability lets corruption to thrive, and for the country to slip further into the debt. While the island has expressed interest to join CARICOM as an associate member, and while this would indeed be a step in the right direction, it is imperative that the island has the opportunity to become more invested in building its future through integrating into economic communities like CARICOM.

Although the island is completely isolated from economic platforms like CARICOM or the WTO, and even more importantly the UN, the island’s economy is very much involved in international transactions. Most consumer and capital goods on the island are imported from the USA, Brazil, Italy and Mexico. A variety of familiar US and European brands and shops can be found throughout the island; grocery stores in Curacao are stocked with American products, even more so than those in the Netherlands for example. Given the fact, that these products are so readily available on the island however, serves to justify why the island should in fact have a larger say in global issues, particularly related to the economic realities facing the island and more broadly, the world. Recently, Curacao was  given the opportunity to sign a trade deal with the USA under the CBERA and CBPTA frameworks which other islands had access to since the early 2000s. Finalized on 23 December 2013, the deal  allows Curacao (like other Caribbean countries) to receive duty free access to various US goods. While this is a step in the right direction, it is not nearly enough to secure the island’s economic future and inclusion in the international economy.

In an age of growing international economic integration, the future of Curacao and other semi-autonomous states with the same status, the future remains a predicament. On the one hand, the economic security provided by being a member of the Dutch Kingdom, as well as an Overseas Country or Territory to the EU (OCTs) has several benefits. Curacaoan citizens are given EU passports, but are not directly subjected to EU laws. The EU assists in development of all OCTs, assisting particularly with issues of remoteness, vulnerability to economic shock, maintaining infrastructure, and encouraging policies of good governance to assist in the island’s development. On the other hand however, this semi-autonomous status is still a shade of grey, and while in many ways the OCT partnership is particularly beneficial to the island’s development, trade deals like the one recently signed with the USA could prove to be equally profitable. Curacao’s lack of involvement in international organizations has in many ways hindered its economic development, and prevented it from developing a sense of financial independence and accountability for its various debts and transactions.