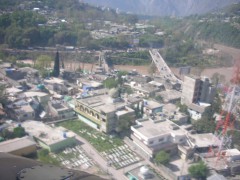 If we talk about the ways disasters impact on democracy and the ways democracies cope with them, we can see considerable variation from country to country, even though the impact of a disaster is always a testing case. In my view it’s not democracy but a functioning system that helps uphold a government in testing times. This has been proven again and again in many instances where it was the structure of the nation, its state of mind and the way things work that was important and not whatever system of government was in place at the time. I want to analyse this notion with reference to two different disasters in Pakistan under two different governments and make a case that dictatorship or democracy is secondary or rather simply irrelevant because it’s  the proper functioning of institutions that matters.

Let us first look at the Pakistan of 2005 under the leadership of retired general Pervez Musharraf’s and the Pakistan Muslim Leagues’ so-called “undemocratic” government. This government faced one of the biggest disasters in the history of Pakistan which put the severest test on the people of Pakistani, their systems as a whole and the government as a functional working entity. The earthquake devastated two parts of the country, and even now there is still no data available that can realistically calibrate the exact scope of destruction.

How did the government react? How did the world react to Pakistan’s ordeal and how did the process of rescue turn to relief and rehabilitation? These are the three important phases that test the endurance of the government.

The government under the leadership of Musharraf rose to the occasion and lead from the front, with a strategic plan where every part of the system knew what it was up to and where it was heading. It was a time when Pakistan had no system for rescue and there were no organisations on the ground to take care of the people after a mega-disaster. I visited the affected areas directly after the earthquake and then two years later I managed to make a documentary so I suppose I am able to take a comprehensive view of the whole.

After the earthquake we landed at Chaklala Airbase adjacent to Islamabad international airport and were whisked away by the escorts assigned to us on the shuttle to Muzaffarabad, the capital of Azad Kashmir, the area mainly affected by the disaster. The same day we were at work helping those who needed help. Our hosts had planned for this as they already had areas marked out for the arriving teams. It was like a war situation when the troops arrive and are deployed to their positions.

It was an occasion when the nation united behind their leader like never before and came together as one. When I returned after two years, the majority of the areas I had visited before had functioning systems, the schools were open, under construction or completed, people had their houses rebuilt or under construction and a payment installment system was in place for people who were taking house building aid. I spoke to many people in Garhi Dopatta, Chinari, Chakothi, two camps near Muzaffarabad, Hattian Bala and many other places, and they were generally optimistic with few people complaining about things not happening as expected. I saw the school in Chakothi completed and the school in Chinari under construction. This happens when people realize they have a duty towards their fellow humans and here indeed people did rise magnificently to the occasion.

The Azad Kashmir shelter construction site – Image by the author

The majority of people were rehabilitated but there were still many who were not lucky enough because they were disadvantaged by the political setup. The Muhsarraf regime tried to bring transparency to the process by empowering NGOs, and giving them areas to work in and freedom to pitch projects. The government working with aid agencies did the monitoring. This all worked fine in the beginning but when political forces became involved, nepotism and favoritism became rife and sidelined those people with fewer connections. When I went to two camps in 2007,  I saw two families who both were government employees but were living in camps. When I dug deeper, I found out that both families actually had housing, but to gain financial aid were staying in the camps so they could get a loan for a new home and the daily rations provided by the government.

In the second case, under the present government of president Asif Ali Zardari, a major flood occurred and was repeated for the next two years. Even this year there have been quite a few areas affected by man-made and natural flooding. The international community first responded very slowly and those who promised aid never fully delivered because there was an acute lack of trust in the government’s ability to deliver. This was not the case after the earthquake in the northern areas where aid agencies and local government gave extensive aid and assisted the Pakistani government. The second major problem faced by the people affected people had to do with the so-called democracy and precisely with their political affiliations. If the affected people were members of the political party in government, they were provided with relief, but if they were the followers of a political party in opposition or even of a failed political candidate, they were left hanging most of the time. Bluntly put, this means that many affected people in various parts of Sindh and Baluchistan never got any aid at all.

The other problem is that people in government who have power would break the dykes and damage the canal banks in order to save their own land,  flooding many villages in the process and causing great suffering to their inhabitants. The majority of people affected by the floods have not received any sort of relief to help them back on their feet; many even now are still running from pillar to post seeking support that never materializes.

I have seen the destruction wrought by both these disasters. And in the latter one I also saw a democratic government failing to deliver because of its lack of international trust, and failing to provide relief because of corruption. In the first case a government lead by a military man delivered with far less corruption because it adopted measures to ensure transparency that eventually did deliver. I saw major reconstruction work being done in parts of Pakistani Kashmir and parts of Khyber Pakhtunkhwa province, on schools universities and hospitals. Housing aid was made dependent on housing quality assurance which meant that the new houses built to these specifications would be better able to withstand earthquakes, thus mitigating the scope of any future destruction.

In short, in the event of a disaster, which system would you prefer to be under – a system that is functional and a regime that is responsive and aware of the task, no matter who is leading and what system it is, or a regime with democratic credentials that is corrupt, ineffective and unable to deliver?