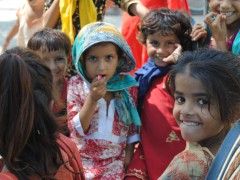 A newly set up medical camp in Khorwah

In the wake of the devastating floods all over Pakistan in 2010 and the recent rain-wrought disaster in 2011 in Badin one thing is certain – if people beforehand had little faith in our democracy’s ability to handle a disaster of this magnitude, they have almost none now.

Obviously, the reason for this was the virtual inability of our democracy to get a rapid response off the ground in the days after the disasters happened. When inefficiency on this scale is seen by citizen voters they turn their gazes elsewhere pretty quickly. However, just why our democracy was unable to respond quickly is a question which has no easy answers, no matter what the primetime hosts on Pakistan TV might say to the contrary.

The first thing that needed to be done in the post-disaster situation after 2010 was to get ready on the ground for anything remotely similar happening in the future. In short, we didn’t need to get caught with our pants down a second time. Only we were. Why? Well, because what happened in 2010 in Pakistan has seldom happened anywhere in the history of the world, let alone in our poor resource-strapped nation. 20 million people were displaced in 2010, so how does a government with no money to balance even its own budget prepare for such massive movements of IDPs (internally displaced persons) in the coming years?

Secondly, even if our government had the resources to prepare for what has happened to Pakistan disasterwise, there are still huge problems to be faced in educating the local populace to evacuate on the ground. In our relief missions in many places we saw army and government evacuee convoys standing empty because citizens were not prepared to leave the affected areas. The chief reason behind this failure is the authorities’ complete inability to guarantee security for all the assets left behind in disaster areas which are often claimed by criminals.

Thirdly, even if the resources were in place and the citizens properly evacuated, the corruption inherent in our bureaucracy would ensure that everything moves at the slowest snail’s pace. As it is, here in Pakistan we are fond of leaving everything to the eleventh hour and that came home with a vengence when disaster struck so what should have been a mad  scramble to help actually turned into a pitiful crawl even though later on it was bolstered by our armed forces and community based efforts.

The narrow path to relief

So is the populace of this nation correct when they refuse to have any faith in the ability of our democracy to alleviate future disasters? Actually, the answer depends on which side of the bridge you view it from. To someone on the ground like myself who has witnessed a great deal of what happened in person, Pakistan has actually achieved two miracles in two years by limiting the number of deaths in the wake of such immense disasters. Inefficiency was present at governmental level, yes, but the highly haphazard manner in which local NGOs and community efforts went about doing relief work didn’t exactly help either. Several relief convoys were looted just because the people coming in with relief goods failed to alert the authorities or even liase with them. Many resources were duplicated and wasted for the same reason. People would just get to the first camp they found, dump their relief there and rush back to the cities to crow about it on Facebook. Disaster tourism was also seen in full swing as many from our expatriate community – with, I am sure, the best intentions at heart – traveled to areas which were having major security issues and started to hand out cash on the roadside, which obviously led to more looting and panicked reports back. Also, at least as far as the recent disaster in Badin is concerned, elected representatives and their families were seen seen in person on the ground working side by side with the government machinery, no matter how many and what kind of hurdles they faced. Yet was this reported by the mainstream media? No, it was resoundingly not reported, because that kind of story doesn’t sell too well here.

Yes, the entire effort could have been a hundred times better. Only as mentioned above  – and without my being apologetic for the government  they simply lack the resources with which to get it done. Citizens in other countries pay their taxes and then complain and raise a hue and cry when democracy does not fulfil its obligations. Here nobody pays taxes but they still expect the same democratic rewards. It’s a vicious cycle and one end has to give. I believe it should be the citizens, who need to accept the responsibility of this being their country and needing their input & contributions as well. We really need to make this system work rather than try to work outside of it and then raising a hue and cry when things go haywire.

Tags: disaster & democracy in pakistan, floods and relief work, Sindh, where did we go wrong