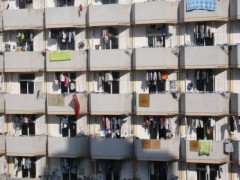 Students in China have their fate determined at a really early age. At the end of their high school, the National Higher Education Entrance Examination – also called GaoKao – decides the universities students can apply to. Their scores determine whether or not they will be able to enter into higher education. The course of their future academic and professional life will be set by this score obtained at the age of 17. That’s an awful lot of pressure for a child to bear!

High school students are under immense pressure and the GaoKao period is for sure the most stressful time for families in China today. In June every year  more than six million students go through it. The entire family’s time is mobilized around their son or daughter who has to work every single day. Anxious mothers come to school daily bringing food to their children, some of them almost going crazy from pushing their children up the road to success.

From one-child policy to Confucian obligations for children to support their parents, there is a lot of pressure for both overworked children and over anxious parents  during this time. To cope with the stress families resort to cheating and  giving bribes to teachers. Some companies have even developed IT cheating solutions such as miniaturized radio equipment that delivers answers during the test. There’s is also a tradition of students throwing away their books after exams.

Stemming from the tradition of  imperial examinations, the Gaokao includes questions on technical and theoretical knowledge in many different fields like mathematics, physics, geography, history, Chinese writing, English, etc. But if the imperial test was based on Confucean literature, the Gaokao deals directly with Chinese Communist Party (CCP) Marxist-Leninist rhetoric. Here’s Question 23 of  the 2011 exam, for instance :

A. The CCP’s great creation of combining Marxism and China’s reality
B. The CCP’s achievement of leading Chinese people through a long struggle
C. A reflection of the common interests and aspirations of all ethnic groups in China
D. The inevitable choice in the social development of modern China

Of course, the correct answer is : “All choices are correct”. Dr Wang Ji, who has a Ph,D. in Marxism at Beijing University says “[The ministry of education] is testing the candidate’s ability to recognize the correct opinion.”. So it’s pretty evident that access to a top-university starts with due and proper acceptance of the CCP’s  principles of politics!

Universities – the best and the rest

Indeed, the university ranking system pretty quickly fills you in on the kind of diploma programmes you can choose.  All students have to choose several universities before the examination, using their own estimation of what kind of education they deserve. The final score obtained at the GaoKao will influences the final decision. The “top-universities” (10 to 20 altogether) are very selective and offer international courses with good jobs at the end. But for most of the students it will be some local college in their own province. Most of these institutions deliver grades easily but their diplomas aren’t really worth much on the labour market. In any case, endemic corruption amongst high-ranking officials translates as the worst kind of living conditions for  students – as the student budgets mysteriously vanish!

Student dormitories in Wuhan, China. There is no heating in winter, even at-10°C

The fight to get into administration

After  spending a few years at university, the freshers are out with their fresh diplomas and start looking for jobs. The lucky ones  use the “guanxi” (or network ) of their parents  to get a good position. The closer you are to  a CCP head, the easier it is. Everyone’s first choice is a job in a state-owned administration like the railways or education sector. These sectors offer perks-retirement allowances, health insurance, schools for the kids and  regulated work shifts like no other private company in China does (including foreign companies).

Most graduate students will give up their own profession for such opportunities. The situation is  different in the private sector where employees are overworked. In Chinese companies and factories, the word “guolaosi” which means “work to death” is  a standard joke doing the rounds but also a very real threat as 600,000 people die from overwork each year in the country.

The classical Chinese gift economy is the best way to get an interview with the Human Resource Department -some nice presents to the boss will do the trick! But getting a  job in  the public sector can become a very expensive undertaking. I remember hearing about a young girl who paid 170 000 RMB (or 5 years of her salary) for her position as a university teacher. I guess we aren’t talking about ritual gifts anymore as this is just blatant corruption. Still, many families are ready and willing to pay such  amounts to secure the living their only child is entitled to as a trade-off  for security in their old age.

For those whose family won’t or can’t pay, the labour market is ferociously competitive. Many will spend months before they find their first job. They’ll have to accept any type of work plus a wage lower than 900/1000 RMB (150USD), even in a city as expensive as Shanghai. The failure of higher education to give students the skills and creativity that companies are looking for is a real issue for China.

“College essentially provides them with nothing,” say Zhang Ming, professor at Peking University. “For many young graduates, it’s all about survival”. To launch their own business, many will become street vendors first hawking noodles, fried rice or DVDs to gain the start-up capital that can be invested in their own  shop or company. So, in the light of relative failure of higher education, is there really any justification for all the woes high school students go through?