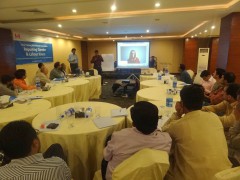 Media craves news that attracts huge audiences and breaking news seems to be an indispensible part of every news channel. Reports having to do with women are always attention-grabbing, whether they be the appointment of the pregnant Marissa Mayer as CEO of Yahoo! in California or the shooting of Malala Yousufzai in the Swat region of Pakistan.

Yet on another level ratings-obsessed media and journalists often seen strangely to overlook issues of great concern to women themselves. Reports are published and televised, interviews are taken and then it all vanishes out of the public eye. In Pakistan and other developing countries this poses a serious problem to the victims and those brave women who venture to talk openly about what concerns them. As I discussed in my last post on the  Gender Friendly Economy, the issue of sexual harassment is one of the most widespread and least talked about issues faced by working women in our country. And when someone decides to talk about it, gender-insensitive reporting by the media often increases the problems faced by the victims rather than mitigating them.

Concerns about this issue have led the International Labour Organization to educate journalists about gender sensitive reporting by initiating the Gender Equality for Decent Employment (GE4DE) project. Collaborating with government, employers, training providers and Intermedia in Pakistan, some 35 training programs  were planned to train approximately 700 journalists across the country about “Reporting Gender & Labor Issues.

The training program starts by educating journalists and reporters about various aspects of gender such as gender discrimination, gender equality, gender-based division of labor and the social, economic and political forces that shape it, the multiple roles played by women at home, as mothers,  community workers and employees, and the gender-based division of those roles, PGNs (Practical Gender Needs), SGNs (Strategic Gender Needs); gender discrimination and sexual harassment in the labor market. Such sensitization is seen as vital for the development of gender awareness in media reporting.

The World Development Report 2012: Gender Equality and Development also argues that closing these gaps is a core development objective which will lead to better productivity and improved development and economic outcomes for the next generation. Based on these core concepts, we must try to make reporters aware of the complex role gender plays when it comes to assessing  vulnerability and marginalization of women in the world of the economy. Vulnerability can increase as we move from urban centers to rural villages, and it can also depend on the level of poverty. Though these are not identical concepts, it has been seen that women in less developed regions are vulnerable to blackmail if their livelihoods are precarious. Because they have little to fall back on and have limited resources and livelihood strategies, they become less empowered. Journalists are also made more aware of the working conditions of women in Pakistan, their salaries and lack of decent work and made to view these issues in the context of gender.

Building on these core ideas, trainers analyze the role journalists can play in a democratic society to empower women and ensure human rights. The media is a very strong tool in any democratic country where it is not very tightly controlled. It can not only raise awareness about the key problems and work as an information broadcaster but also plays a major role in educating the general public and building opinions.

In journalism, we often look at a region’s women from a stereotyped viewpoint: all women in Pakistan are denied all rights, while no woman in New York can be a family person is the kind of viewpoint commonly adopted by the media. Yet the media must go beyond such perceived stereotypes, if its reporting is to be accurate and neutral. This does not mean that the local culture shouldn’t be respected: gender-sensitive reporting or reporting about women’s issues can be very problematic in some regions, so it is important to use creative approaches while being careful not to hurt local sensibilities.

In the aftermath of the failed assassination attempt on Malala, one image of the girl was widely circulated in the media of her not wearing a dupatta (head-scarf), an image which outraged many local religious factions. Sometimes sharing images of the victims lead to even more problems for them if they continue to live in the same area.

In 2010, Pakistan introduced a new law in the shape of  “The Protection against Harassment of Women at Workplace Act, 2010”. Prior to this, there was no proper legislative instrument for reporting harassment in public or private. Yet this law might have eased the process of filing reports on sexual harassment but has also exacerbated another problem: the tendency to blame the victim not the perpetrator. Often in the news reporting of such incidents, the media mention unnecessary details about the clothing worn by the woman, or about her being out alone after midnight – all of which are telltale pointers to the erroneous fact that somehow the victim herself was to blamce.

There are many such cases where slight errors of judgement or the wish to adding a little spiciness to the news leads to tremendous problems for the victim. Since media news reaches huge swathes of people, these issue can lead to suicides, attacks or public alienation of victims. Gender-sensitive reporting is possible and can easily be learnt by the reporters working on sensitive issues. This is not only ethically necessary but is also a matter of urgency if we are to move on to a better era with safe workplace and public spaces for everyone.