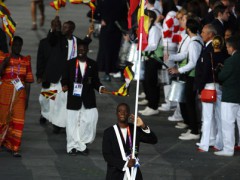 The current lead article – The Olympics: A Tale of Two Worlds is asking if; “Do the Olympic Games provide a unique opportunity for us to come together on a level playing field, or are they just one more circumstance in which the differences between the developed and developing worlds are shown in stark relief?”

A quick scan of the scorecard of the London Olympics, just like it has been in the past, leaves one with the conclusion that it is always the wealthy countries that dominate the medal winners as the poor countries wallow at the bottom with a medal or non.

Winning in the Olympics as most victorious athletes have testified, comes with heavy allocation of resources. In most cases the poor countries have no such resources to invest in their own Olympiads as their countrymen and women go hungry, die of curable diseases, live in abject poverty, or seek health care services from hospitals without drugs or doctors.

Clearly, the level playing field is tilted in favor of the wealthy countries.

Take the case of Uganda which started participation in the Olympics in 1956, its first Olympic gold (and so far the only) medal was won in 1972 by John Akii-Bua in boxing. Since then Ugandans have been looking forward to another gold which is yet to come. Ugandan Boxer John Mugabi who came close but only managed a silver in the Moscow 1980 Olympics.

During the Beijing Olympics, Uganda did not win any medal. In the current London Olympics 2012 – Uganda’s medal hopefuls Moses Kipsiro and Dorcas Inzikuru have been complaining of poor facilitation and ill preparation due to insufficient financial support. This complaint has persisted in the other Olympics Uganda has participated in.
So far, the London 2012 Olympics have not gone well for Uganda. Hopes of winning a gold medal are getting slimmer at every end of game that the country’s Olympiads participate in because their performance has been miserable and therefore they don’t proceed to the next stage.

What began as a sixteen-man medal-hunting field at the London Olympics has been reduced to just two athletes but even Moses Kipsiro and Stephen Kiprotich need something extraordinary to step onto the podium. In the women’s marathon Uganda’s Jane Suuto finished 95th out of 109 in 2 hours and 44 minutes, 46 seconds. It was a disappointing finish after the race was won by Ethiopia’s Gelena Tiki.

Athlete Docus Inzikuru was knocked out in the initial stages of the competitions. Given this unflattering performance winning a silver or even a bronze will be a miracle.

In Kampala, the conversations about Team Uganda at the London Olympics are cynical. Many are describing  the country’s Olympiads as tourists led by a huge technical and political delegation (led by the Vice President) that outnumbered the athletes. Following the complaints from Uganda’s Olympics team the popular but cynical opinion among Uganda’s social media networks is that the International Olympic Committee should include corruption, police brutality in the next games where Uganda would put a spirited competition. This is because little is being done to support sports activities yet millions of tax payers’ money is lost to corruption.

Good governance issues at the Uganda Olympics Committee are also to blame. The committee spent much of the last 4 years quarreling over leadership positions instead of preparing for the competitions. This created more confusion in Uganda’s organization and preparations for the Olympics.

“The games are a waste of huge money on few individuals when most Ugandans wallow in abject poverty and live in squalor conditions,’’ that was the opinion of a Kampala resident living low income residence. His opinion is not different from those of his peers and several Ugandans in the middle class. These see little tangible value in participating in the Olympic games.

Yet, huge investments on teams representing rich countries in the Olympic games is evidence that talent alone without proper nurturing may not win more medals. It is clear money plays a crucial role in the Olympics as illustrated by wealthy countries like China and the USA.