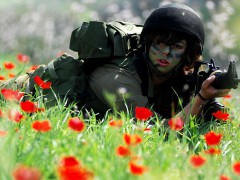 The Military: A Male Institution by Definition

“The military, the defence forces have no gender. Military only has power, the capability to fight, authority and social prestige. The unity of the defence forces does not know gender or age. There are female soldiers and there are male soldiers. Professional competence, capabilities and qualified knowledge are what matter.” /Andrea Szabó née Szabó, lieutenant-colonel

In contrast with this approach, it was breaking news in the USA a month ago, when Secretary of Defense Leon Panetta lifted the ban on women’s participation in combat. The decision provoked a heated debate that even touched on the legitimacy of female participation in the military. In fact, there is no other institution where gender differences play such a big role as in the military. Traditionally, it has always been an institution where young males could prove their “manhood” by being virile, aggressive and brave fighters of great physical strength protecting the nation. Such attributes were in marked contrast to those of young females who acted delicately, were weak and shy, and, instead of working publicly for the nation were relegated to the private sphere to work in the households of their families. The stereotypes categorize men as active protectors and fighting warriors, and females as passive, protected and non-violent mothers, wives and daughters. Such stereotypes about traditional gender roles, and the role of the military in preserving dominant male stereotypes are the reasons why the military is also an arena in the fight for gender equality. Female soldiers do not only fight for the nation or to make a living – willingly or not, they are judged as women in a traditionally male environment, and urged to prove their equal worth in service as well.

Females in the Hungarian Defence Force

In Hungary, the number of professional female soldiers is on the rise. Nowadays every fifth soldier is a woman in the Hungarian Defence Forces. Compared to the NATO average of 10 percent, Hungary has achieved significant results in gender equality in terms of access to military careers. There are 2 200 women in military service including 15 women colonels; women are present in almost every level and institution of the Hungarian military – from the backoffices to the battlefield in Afghanistan (as of 2012).The current roll of honour also includes two female soldiers who were killed in Afghanistan.

Hungarian female soldiers have been allowed to perform combat duties since 1996, but have been present in the military for a much longer time. Apart from the traditional female roles in the military (such as nurses, canteen workers and small traders), the socialist Hungarian army hired many women as soldiers, but especially for more “feminine” less well qualified jobs  in such areas as  healthcare, administration, logistics, human resources or finance.

Most of today’s female soldiers initially worked in a civilian post in the military. It was only in 1994, that some faculties opened for women in military higher education, and women had to wait till 1997 before they could enter all faculties. Now every Hungarian woman between 18 and 47 can apply for a military career if she has the necessary qualifications. Wage equality between males and females in the Hungarian military was established in 1998. However, the scope of activities for women mainly still covers the same areas as it did during socialist times: the ratio of women in healthcare, logistics, administration and human resources exceeds 50 percent while in the brigades it’s down to around 10 percent. Female soldiers are mainly subject to the same psychological and health requirements as their male counterparts, except for the time constraints on physical exercise in the aptitude test.

The main motivation for choosing this profession is financial. The military is able to offer something that is rare in today’s world: a secure workplace with an acceptable income which can even be maintained after the maternity leave. It is now becoming increasingly seldom that someone chooses a military career primarily for sentimental reasons such as protection of the homeland or the nation.

“I would like to give an example of the little things that might cause trouble in the military. A few minutes ago, when we entered this room, I wanted to act politely and I gave way to the female colonel accompanying me. However, she understood the situation in a moment, decided what is right in such a situation, and acted like a soldier. So it was me who entered to the room first” – explained Tibor Benkő, chief of the General Staff at a conference about female soldiers in 2011.

These remarks clearly show how difficult it can be to decide if females are treated equally or not in the military. The uniform means equality in terms of career opportunities, pay and duties, yet there are different approaches towards the prevailing differences between male and female soldiers.

Female soldiers often outperform men in humanitarian missions – however, they cannot be judged only on the basis on their femininity or motherhood (Source: Wikimedia Commons)

According to one quite widely shared approach, females are better than males in certain kinds of military activities. Because of their psychological differences, they are able to show more empathy, precision and endurance, which (according to some research) makes them more suitable for such fields as peacekeeping, for example. There are advanced studies on the psychological differences (Túri, Bolgár) between males and females which investigate in which tasks, and under what conditions, female outperform male soldiers and vice versa.

However, drawing on biological differences has its downside. The last resort of those who opposed to women in the military is their perceived unsuitability for certain tasks because of their physical weakness. In reality, proof of their physical and mental suitability is clearly given in the experience and literature of NATO. Even so, there is still a glass ceiling for females in the military which is butressed by claims of biological differences.

For instance, no matter how emancipated the Hungarian military is, there has never been a single female general in all its history. Hopefully, this is only a question of time, but it is still not possible to ignore other biological arguments against inclusion of women in the military besides their supposed lack of physical strength. The most common ones focus on issues of “femininity” and “motherhood”, which they see as standing in total contradiction to violence. Femininity cannot be accommodated with the killing or hurting of others. Female soldiers often have to face social contempt fuelled by the idea of the traditional family model where their first duty is to raise children and care for their families. Officially, in Hungary, female soldiers are supported and praised for being mothers and wives at one and the same time; what’s more, these twin roles are considered to contribute to their mental strength. In reality, however, female soldiers have to make hard choices and confront deeply embedded social conventions when they apply for foreign service and leave their children behind.

Simply different or the same – but in complex ways?

All in all, even though female soldiers in Hungary do not face the same disadvantages and discrimination (at least according to the reported cases) as their colleagues in many other countries, they still don’t bear the same burdens as their male counterparts. At a conference, a prominent female colonel was asked whether she thinks  female soldiers are better or worse than males. Her answer was: “They are either not better or not worse. They are simply different.” But are they really? Or is it just a social construction in the military and other segments of society that dictates such a reply? How much do physical strength and other biological differences really count?

Answering these questions goes well beyond the scope of this short post. There are many different approaches towards the complex question of equality between male and female soldiers, even in such an emancipated military as the Hungarian Defence Forces. One thing is sure, though, and that is that females have been present in the military for centuries as nurses, canteen workers, small traders, administrative workers, assistants and volunteers and and now increasing numbers of them are serving as soldiers in the same way their male counterparts have done for centuries. It’s all the same then whether we consider them as protectors of the nation, heroes fighting for gender equality, or just everyday women working for a living – no matter what their motivation, they all deserve respect for their achievements. So on Women’s Day, when we celebrate prominent female achievements, we should think of female soldiers as well.