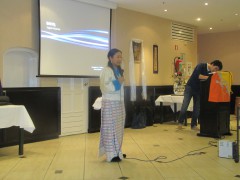 As the international community celebrates “The Day of the  Woman” , I am glad to have been born as a Bhutanese woman. My life has been created and shaped by the fact that our society has generally allowed us women  the same freedoms and equality of opportunity as  men.

Unlike in many communities in China and India, having a daughter in Bhutan is looked upon more favourably than having a son. This because daughters have been known to be better caretakers of the home and the elderly parents.

Women in Bhutan have always enjoyed a privileged and progressive position. The matriarchal structure – where women inherit property unlike other women in some  of the neighbouring countries – grants women access to land and property. Bhutanese inheritance law stipulates equal rights for all children, regardless of sex or age.

In the early 1960s when Bhutan first opened its doors to development, there were  more boys than girls sent to India for formal education. Surprisingly, discrimination of girls was not the motivating factor here which  was rather that parents were unwilling to send their daughters  to schools for fear of their safety – as they would have to walk  for several days to reach their respective schools. Consequently, there were very few women at high levels in government and civil administration.(See: Treasures of the Dragon Kingdom: A Portrait of Bhutan by Ashi Dorji WangmoWangchuk)

In my own family my brothers and my father have always encouraged my sisters and me to take the lead in  decision-making  about our lives. My late father motivated  us  to be fiercely independent and assertive – and this is very often the case with families with daughters in the country.

I  realize that I have  always taken for granted the high status that I enjoy as a Bhutanese  woman when compared to other women in the South Asian region. We never  really had to fight for our basic rights as other women did. Female genital mutilation, forced marriages, honour killings, social ostracism after divorce are all still very alien to me. We have always enjoyed the right to vote and self-determination. Buddhism is the main state religion and it can be credited for playing a pivotal role in creating this environment.  The Buddhist tradition and Buddhist values view men and women as equals.

Just like in any other society, things are by no means perfect for women in Bhutan and there are numerous challenges they have to face. Despite  equal opportunities, there are still differences between men and women particularly in terms of access to education, enterprise  development and governance. Economic participation  of women is  miniscule, especially in the public sector. Educational attainment  is another challenge. There are only  6,166 women compared to 19,835 men employed in the civil services  i.e. women account for only 31% of the civil service workforce. As the joint family system is now being replaced by nuclear families, working women are juggling between their careers and families. Earlier on one could depend on the extended family to help care for the children, this is now no longer always the case. Furthermore, the total literacy rate of women is only half that of men.

Even after the introduction of  multi-party democracy in Bhutan in 2007, there are still only six women representatives on the 25-strong National Council while the National Assembly has a mere four women representatives out of 47 members. This is still a remarkably low number even though it does show a slight increase over the numbers in pre-democractic days. Women members account for only 8.5 percent of the National Assembly and 24 percent of the National Council.

Even so, despite all the challenges that Bhutanese women face, there are still a great many privileges that they enjoy. Women should take full advantage of this, avoid complacency and try to play a greater role in politics and educational programmes – which will lead to further economic independence  and educational attainment. Since they enjoy same legal rights as men in terms of access to health, education and public services, they should make the very best use of  the economic, cultural and political opportunities around them.

I  have and am still passing on this legacy of equality and freedom to my two young daughters so that as women they can achieve and make a difference in their own lives as well as in those of others. I keep reiterating that they have a right to make their own choices and that they should be assertive while at the same time keeping an awareness of  the broader cultural environment around them.