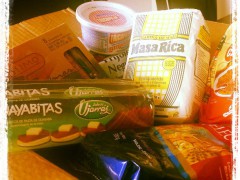 As economic immigrants, where do we find our cultural identity? The answers are probably as unique as every immigrant who arrives in a new country. So I decided to ask a few of my Latin American friends who have also migrated about the ties that connect them to their home culture.

In general it seems that the cultural ties are found first in people, and secondly in food. And that whenever possible, we make small sacrifices to obtain something that helps us connect with our past, whether it’s buying ingredients to make a traditional meal, asking friends and family to send us “care packages” of the food we miss or discovering the local immigrant hotspots or restaurants. Mostly though the cultural connection works both ways: once you’ve left your land you are changed and the key to happiness is embracing this new grafted culture.

In London Diana receives a care package from her mother in Costa Rica. Photo by Diana Trimiño, used with her permission.

Laura Vidal, who lives in France told me about a strange phenomenon: that nostalgia can hit you through food even when you don’t like the particular dish! There are dishes that remind her of her original culture and childhood and bring back the warmth of home, even when she doesn’t like their taste. I’ve found the same to be true for me, when I’m willing to pay for a box of cookies from my childhood, even though as a child I despised them as gross confections  I never wanted to eat. It seems as though at a distance, after many years, the value of the memories of birthday parties and lunchboxes trumps any question of taste.

For Katherine Cerdas, who moved from Costa Rica to Spain, culture is something that is inside us, something that we all carry with us regardless of the material trappings in our memories and our minds. So when nostalgia struck, she decided to learn how to cook in Spain to be able to make some traditional Costa Rican dishes.

Katherine and I have also stumbled on the same challenge: finding the right ingredients. Thanks to globalization, there are some ingredients that are now available across borders, and she has been able to find tamales for the December holidays made by a family in Madrid, or sent from Germany by mail. It is hard to find the regional or ethnic ingredients for many dishes, specially if the immigrant community is not particularly large.

In my neighborhood I can find many Central American products as well as Peruvian ones, but I can’t go shopping with a specific recipe in mind, I kind of have to go and see what I can find, and work within those parameters. There are larger supermarkets that cater to the Latin American community but since I don’t live close by and don’t have a car, I can’t get to them easily. The internet gives me the chance to buy some food items, but I could end up paying 10 times what I would pay back home for the same product. With a budget, it is hard to justify the expense. So I learn how to do without, or make something similar with what is readily available, creating my own version of Colombian fusion cuisine. And while I can make myself a Colombian style hot dog with quail eggs, coleslaw, fried potatoes, pineapple sauce and cheese on top, eating it at home is not the same as stopping at a street cart and eating it sitting on the curb, watching people go by.

One of my friends from kindergarten who now lives in the USA discovered this as well – that it is not the food itself that makes the cultural connection, but the people around the table, the social aspect of eating. In Perú, family meals are important and some dishes are only to be shared as part of a social occasion: so even if there are Peruvian restaurants all over the city, the connection to the family is lost and the taste is not the same. Even the same ingredients taste different when produced in a different place.

Food also becomes the connection to one’s new home. For Denise Duncan, a Costa Rican author living in Spain, this has sometimes caused raised eyebrows when she visits and people back home are faced with her new preferences at meal times. Although she requests travelers who visit her in Spain to bring a bottle of Costa Rican Salsa Lizano, when she travels to Costa Rica, she also brings newly acquired tastes with her, drinking Spanish wines and using virgin olive oil, despite the extra expense. For her, it is part of migrating, and she rejoices in it.

Another friend, Paula Calvo, discovered that she found she had more in common with her new culture than with the one she left behind. As she moved from Costa Rica to Europe, she was brought closer to her family’s past. Although she had never met her grandmother who immigrated from Spain to Costa Rica, she was able to get to know her as she discovered traditions and ways of being in Spain that resonated with her upbringing, and she found that she had more in common with Spain than what she’d thought. When she goes back home and hears comments about how lucky it is she doesn’t have a new accent, she replies that even if she did have a new accent, it shouldn’t matter. That speaking a certain way will not make her less. And I think that’s the lesson that we have to learn. That one culture is not better than another, and that we should be open to changes both in ourselves and others.

In the end, as economic immigrants, we’ve made our choice to move to a different place for better economic opportunities, to experience new cultures and to learn new things. This does not mean that we’ve turned our backs on our home culture, nor does it mean that we can’t change. We may not be able to afford buying imported food, eating out in restaurants, traveling back home to visit or ordering nostalgia items online, but the important aspects of our culture, we carry them inside ourselves.