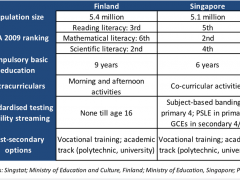 Finland’s education system, which has emerged from a radical overhaul initiated over 40 years ago, is a source of fascination for many countries. Although Singapore students match the Finns in terms of performance on literacy tests, there is a stark contrast between both countries’ education philosophies. Perhaps we can do with a shift in paradigm.

The 2009 OECD Programme for International Student Assessment (PISA) scores suggest Singapore and Finland are seemingly on par in terms of students’ academic performance. Students from both countries were ranked among the top six spots in terms of reading, mathematical and scientific literacy.

Compulsory basic education is the fundamental educational requirement in both countries. Both view education spending as a top priority. Both systems seek to provide “holistic” education, by encouraging students to engage in non-academic activities and interests.

Even so, the differences are considerable. In Finland, standardised testing is non-mandatory before students turn 16. In fact, students are not measured at all in their first six years of school. The Finns discourage homework: free time should be spent playing and exploring other interests. To them, education is not about academic success, but about learning and pursuing a passion. Hence, the Finnish system does not discriminate against students who may be late bloomers, or simply not proficient test takers.

Educators in Singapore might find that hard to fathom. After all, academic tests are probably the most objective measure of one’s ability. During the compulsory education years (primary one to primary six), students face numerous examinations and assessment tests. Based on how students fare, the Singapore system then caters to students’ differing needs and learning capabilities. Because every child is different.

It is a pity that the energy fuelling our national obsession with standardised testing cannot be channeled into other aspects of the schooling experience. The strong focus on examinations may drain young students of their creativity, since all that is required is the correct answer to each question. Trying to instill creativity as students get older, after years of test preparation, is an uphill battle.  No amount of educational funding and programmes can hope to rekindle a flame which has long died out.

We might ask: what, then, is education for? If the purpose of education is to equip citizens with the necessary skills and knowledge to contribute to society, then both the Finnish and Singapore systems are satisfactory. If education is meant to be an “equalizing instrument” for society, both systems also promote social mobility. However, if we view education not merely as a socio-economic tool, but something of greater intellectual purpose, then Singapore’s system appears painfully lacking.

Only dead fish go with the flow

Recent developments in Singapore’s education system, although well-intentioned, seem to be indirectly augmenting the inadequacy. The expansion of the Integrated Programme (IP) scheme is a case in point. The IP promises a more holistic and broad-based education that will stretch students intellectually. Not having to spend two years preparing for the “O” Level examinations allows for greater flexibility in the curriculum. Schools can offer additional enrichment programmes, or even alternative curricula such as the International Baccalaureate.

The catch? Students now compete at an earlier age to secure the coveted spots in elite IP institutions. This translates into increased test preparation at a younger age. What Singapore has introduced is another form of unnecessary academic streaming, at too early an age. It is the age when children should be exploring interests, instead of being constrained by examinable subjects.

Sir Ken Robinson, a renowned advisor on education, believes education needs to be transformed and not simply reformed. Standardised testing, in whatever form, cannot be part of the solution. If students are trained to avoid mistakes and be afraid of making mistakes, then they will “never come up with anything original”. Indeed, the demand for a new education model, where creativity is allowed to flower and interests are nurtured from a young age, is greater than ever in today’s fast-changing era. People are required to think on their feet, and cleverly react to unexpected scenarios to stay ahead of the competition. A system of standardized testing that rewards mere rote learners is obsolete.

Finland’s achievements serve as evidence that even in a rigorous education system, innovations exist and can flourish. At the moment, Singapore isn’t caught entirely on the back foot yet. But we need to take a bold move forward. And yes, with a little more creativity too.

Marcus Leong is a member of Global21, a student network of international affairs magazines and a partner of FutureChallenges. A longer version of this article was first published in The Singapore Globalist.