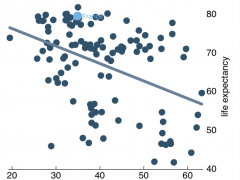 Inequality, especially uneven access to healthcare, has increasingly come to be seen as central to understanding the development of chronic diseases. In France, a country synonymous with equality because of its revolutionary past, the complexities of combating inequality between individuals and areas provide lessons

Non-communicable diseases (NCDs) now account for over 60% of deaths worldwide and this percentage is expected to continue to grow at an alarming rate as populations age and death rates fall concomitant with material progress and the scientific advances of modern medicine. Many expect this trend to be exacerbated by the weakness of medical institutions in many developing countries as well as worrying behavioral trends such as smoking and alcohol consumption.

As was quickly pointed out by many observers of the AIDS epidemic, NCDs, like communicable diseases, have an important social dimension that must be understood when considering holistic solutions. Because of the chronic nature of NCDs such as cancer, diabetes and cardiovascular conditions, inequality in access to healthcare, education and healthy food, among many other factors, is a key driver of their development.

Socioeconomic differences in general mortality rates are evident across the developed world as well as in developing countries. Even more enlightening, when disaggregating mortality based on cause of death, the prevalence of most chronic diseases is noticeably higher among poorer, les educated populations.

These findings have led many to conclude that it is not simply rising standards of living and medical advances that account for higher life expectancy in the developed world. Advances in combating inequality that have gone hand in hand with material progress are also central to understanding life expectancy.

The myth of the French exception

These trends may be more pronounced in developing countries, however, they are prevalent and continue to be a key factor in France as well as the rest of the developed world.

Inequality manifests itself in many different ways. Considering simply access to healthcare, even in a country with universal coverage such as France, over 5% of lowest-income families reported forgoing needed medical attention. One can imagine that the percentage of people who forgo routine medical exams that are essential for catching chronic diseases early is even higher. This lack of medical attention means that diseases are caught later and risky behaviors go on unabated by doctor’s warnings.

This surprising figure illustrates, as many other studies have shown, that access to healthcare is not simply a question of coverage. Various causes inhibit people from seeking the routine medical attention that is essential for curbing the development of chronic illness. Among the most important factors are time, distance and money.

Inequality is not simply about access to healthcare and comprises many other types of inequality. Education is often cited as another important variable, even in the developed world where primary education is nearly universal. There is a remarkable social gradient for many risky behaviors that result in chronic disease, such as smoking and avoiding annual check-ups.

Lower-class working class families are often under considerable time constraints with both parents working long hours, not to mention the higher prevalence of single parent households among low-income families. Time is often the most cited reason for why people, of all socioeconomic statuses, do not regularly go to the doctor.

A 2004 study found that the higher frequency of chronic disease among the poor and less-educated was significantly more pronounced among working age adults and among women, particularly for heart disease and diabetes. These numbers point to the weight that time constraints play in the decision to seek medical attention early and often.

Risky behaviors start young and a recent poll by La Mutuelle Etudiante found that 34% of French students had forgone healthcare because of lack of money and time. In particular, more and more students are being forced to work during their studies to cover rising costs, making spare time a precious commodity.

Romania to the rescue?

Further exacerbating the issue of time, in many poor and rural areas, doctors are much scarcer. Over the past several years, France has been dealing with the increasingly complicated problem of “medical deserts.” This term, coined by the media, refers to areas suffering from a lack of doctors. The term often conjures images of small villages with one doctor, but the problem also includes many suburban and periurban areas that have seen their doctors pick up and leave because of demographic trends and increasing insecurity.

French authorities have developed a number of clever schemes to address this issue, although none of them seems to have been the magic bullet. Various national and local initiatives have tried to coax doctors into settling in these underserved areas through providing subsidies and financial incentives and even offering to pay for medical students’ education if they agree to practice in an underserved area for a certain amount of time.

One solution solution that has attracted a great deal of media attention has been to call on foreign doctors to fill the gap. Between 2007 and 2010, the number of foreign doctors practicing in France has risen by 20%. 30% of foreign doctors come from Romania, where salaries are low and French is a commonly taught foreign language. Despite some success, the problem persists and is often even overlooked in the case of poor areas.

Even families with medical coverage can be kept away by economic considerations as they must often pay steep co-pays or pay out of pocket and wait to be reimbursed. In France, while coverage is universal, bills for many medical services are expected to be paid out of pocket. This can represent a considerable burden for families.

Budget constraints are nothing new for the French healthcare system. The percentage of the cost of prescription drugs and medical services covered by national healthcare has continually dropped, making supplementary private insurance increasingly important for financing healthcare costs for French families. Ires, a French research institute, found that, adjusting for inflation, the out of pocket cost of healthcare for French families had progressed from €217 in 1980 to an average of €547 in 2008.

This has lead to a situation reminiscent of the American healthcare system, albeit not as stark, where your access to healthcare depends on your job and the quality of private supplementary insurance offered to employees.

NCDs are presenting a new set of challenges for health authorities. In many ways, they will be more difficult to deal with over the long run than the communicable diseases that caused so much suffering and death in the 20th century. National healthcare institutions in the developed and developing world will struggle to efficiently deal with costly chronic diseases as their frequency multiplies. One of the most challenging aspects of addressing this problem will be dealing with the socioeconomic dimension of the issue. Inequalities, like chronic illnesses, have deep roots and are difficult to correct.