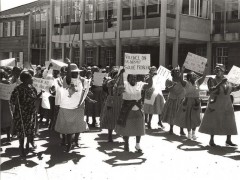 Poverty and unemployment are chronic ailments that afflict much of South Africa’s scattered township population. These townships, known as shanty towns in much of the rest of the world, comprise a large percentage of the overall population of the country and therefore any conversation about South Africa’s future cannot be isolated from them.

As is so often the case, the poor standards of living that most people in these townships have to endure – as a result of their low economic status, coupled with woefully inadequate service delivery from the government – have spawned high levels of disease (most notably AIDS), crime and violence, as well as alcohol and drug abuse. Often all of these are closely intertwined and mutually reinforcing.

While such ailments are undeniably widespread, it is the younger demographics that are the worst affected and this is of particular concern when more than 20% of South Africa’s overall population are between 15 and 24 years old. This is the generation so often referred to as a “ticking time bomb” by politicians and the media.

However, all too commonly subsumed into this wider conversation is the specific and acute plight faced by young women in South Africa’s townships.

Firstly, rape and sexual violence against women are particularly rife. Some human rights organizations say that as many as 40% of South Africa’s women are likely to be raped in their lifetime, a higher percentage than those who will complete secondary school.  In 2010, more than 45,000 cases of domestic violence against women were reported in South Africa, nearly as many as in the US whose population is almost four times greater. In South Africa’s townships, domination of women, in whatever form it might take, remains a way for men to gain respect or to assert a sense of power and ownership in an otherwise disempowered and deprived environment.

Levels of AIDS are also higher among women (almost 4 times higher than men in the 15-24 age bracket), in part due to the fact that men are statistically more likely to have multiple partners and still all too often shun contraception. Again, this can be seen as a symptom of the prevailing patriarchal attitudes that permeate South Africa’s township communities. Young pregnant women and young mothers are often left to fend for themselves, due to the on-going legacy of male migrant labour.

All of this contributes towards a current context where, at the simplest economic level, there are much higher unemployment rates amongst young women than young men in South Africa’s townships. When women form over half the population of the country, again, any conversation about South Africa’s development must take their specific plight into account.

Economically empowering young women in South Africa’s townships would have many positive benefits for the country. Firstly, according to a South African Development Community report women are more likely than men to spend money on the education and well-being of their children, so better economic opportunities for young women would mean a brighter future for the next generation of South African township dwellers they will give birth to.

Economic empowerment for women also means that they would no longer have to be, as many currently are, financially dependent on (often errant) men, making it easier for them to stand up for themselves, or escape from situations where they are victimized, used or abused.

But how do we actually go about levelling the employment playing field for women? Whilst economic empowerment for women might combat gender inequality, it is precisely gender inequality that makes it difficult for young township women to find gainful employment in the first place.

While there are many NGOs and programmes that look to empower South Africa’s women, these seem to some extent to be coming at the problem from the wrong angle in their emphasis on exclusively working with and talking to women. While events with heavy media coverage such as Women’s Day are certainly a step in the right direction, more needs to done to target and educate South Africa’s male township population (many of whom have limited literacy and access to good education or mainstream media) about gender equality and its positive implications for South Africa at large.

Beyond the confines of the NGO sector, the voices of South Africa’s poor young women all too often continue to be drowned out by the clamour of the prevailing patriarchal discourse and by a homogenised developmental and transformational conversation that, at least to some extent, adheres to this discourse. It does this both through its failure to give adequate weight to the specific plight of young women in South Africa’s townships, and through the presumption that it holds the right to speak for their specific experience. It’s high time to sit down, shut up, let these female voices speak for themselves and give them our undivided attention. We will all be better for it.