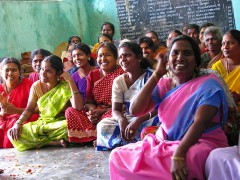 The famous Lebanese philosopher Charles Malik once said, “The fastest way to change society is to mobilize the women of the world.” This thought is more relevant than ever in the 21st century when nations across the globe are discovering the critical contribution women make to building communities and driving economic growth.

Even so, it’s an idea that still has to gather widespread acceptance in Indian society. Over the years, the role of women in Indian society has typically been one of nurturers and caregivers rather than one of breadwinners or leaders. Indian men respect women as mothers who gave them life, as wives who give them the pleasures of parenthood and as daughters who are modest figures in the background – not the foreground – of their households.

The origin of the Indian idea of what is appropriate female behavior can be traced back to Manu in 200 BC: “by a young girl, by a young woman, or even by an aged one, nothing must be done independent, even in her own house”. Over the years the role of women in Indian society has progressed and women have become much more independent and are making their mark in various fields. Yet in modern India it has consistently been observed that although in theory society claims not to discrimate on grounds of gender, in actual practice  women encounter many hurdles if they participate or lead in a male-dominated field. This is especially apparent in the public sector which – even though the country is in the process of passing landmark legislation such as the Women’s Reservation Bill which reserves 33% of seats in legislative assemblies for women – has done nothing to encourage voter approval of female leaders. Occupational gender stereotypes continue to exist in our society, be they apparent or discreet.

The International Labor Organization’s report on the Status of Women in India says, “Although legally there isn’t supposed to be any discrimination against women, this is not reflected in practice especially in the organized sector jobs”. However, what Indian society needs to recognize is that what Charles Malik rightly pointed out in the 20th century is in fact the crux of our social development. The need for female leadership especially at the grassroots level is now more critical than ever for the country’s social and economic development. There’s a whole body of evidence to show that a woman as head of the village can do a great deal in improving basic necessities in rural areas such as access to water (which is women’s work in the villages) and sanitation facilities (also a critical issue for women).

One shining example of how important female leadership is for Indian society is Bhavana Damor who is the  sarpanch of  Gram Panchayat in the Dungarpur district (Rajasthan). She was elected to a reserved seat in two consecutive elections. But in the third election, the seat was declared unreserved, and Bhavana faced stiff competition from her male competitors who were determined to win and end female leadership on the council. But Bhavana was not deterred. On the contrary, she did what women have always done, she rolled up her sleeves and kept on working—to ensure that girls and boys could go to school and women were taught to read and write, so that roads were built and villagers could have clean water and proper sanitation. The women in her village rallied behind her and she won the election for the third time.

What Indian society needs right now are such strong women leaders and role models at various levels especially at the grassroots level. Their efforts will help build our nation and lead us towards social and economic progress.

Born and brought up in Mumbai, Geeta has traveled the length and breadth of the country and brings with her deep understanding of grassroots India. She is a Master of Commerce and a Certified Fraud Examiner by qualification and a Strategy Consultant by profession. She has worked extensively in the areas of transparency, accountability and compliance and helped multinational clients cope with sensitive issues, mitigate risks and re-engineer their processes. She has also worked as a Development Consultant for an Indian Parliamentarian and helped him devise a labor strategy for his state and improve the quality of education in his constituency. She is currently running a nationwide program to empower women in policy & social development in collaboration with Harvard's South Asia Institute. Through these endeavors she aims to use her business experience and expertise to make a sustainable difference to society. She has a passion for languages and photography and moonlights as a professional photographer in her spare time.