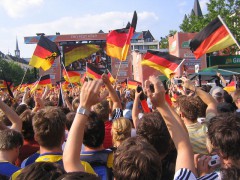 Germany is not famous for hot summer months but between mid-June and mid-July 2006 it felt like living in a mediterranean country. July 2006 was the hottest July on record. Why do I tell you that? Because it’s probably one of the most important reasons why the Germans will always remember the World Cup 2006 as the Sommermärchen (summer fairy tale).

In the year 2000, Germany was elected as the host of the World Cup 2006 (12:11 against South Africa in the final vote). I don’t remember any negative reports on this decision in the German media landscape. This could be a case of retrograde amnesia. Yet, it makes more sense to have a look at the situation during and after the World Cup.

I was living in Köln (Cologne) at that time – which was one of the World Cup venues – and I remember thousands of fans from England and Sweden celebrating there. When Sweden played against England, thousands of Swedish fans were celebrating in a park not far away from my apartment. It was simply peaceful and cheerful.

For me, the whole World Cup was like this and if I ask my friends and colleagues they would probably tell similar stories. It was that summer when the Germans fell in love with watching football games in groups of thousands of people. They even invented a new term for it: Public Viewing. English native speakers don’t use this term but Germans often use words that they think are English (see 13 words Germans think are English).

It certainly was helpful for Germany’s football fans that the German team beat all expectations and ranked 3rd. This might be the reason why the documentary Deutschland. Ein Sommermärchen was so popular.

The Trailer for Deutschland. Ein Sommermärchen. It’s in German but it shows the atmosphere at that time in Germany.

International media praised German hospitality and they were surprised that the Germans can indeed celebrate.

„To say the World Cup has allowed Germany to love itself again would be overly simplistic: that process has been a long one at whose difficulties we can largely only guess. But witnessing the manic euphoria that broke out in Berlin’s streets after the host nation beat Portugal on Saturday to be placed third in the tournament, it was hard not to feel an irresistible sea change has taken place in this country over the past five weeks.“ (Marina Hyde, The Guardian)

This might be the most important legacy of the World Cup 2006 in Germany. The country had the chance to present itself as a peaceful and hospitable country.

Now these were just my personal impressions and memories from the World Cup 2006 in Germany and another author might have written a more negative summary but I can’t help myself: I love football and the weather was nice!