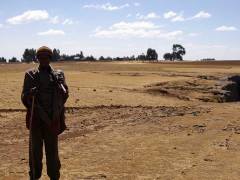 Ethiopia is Africa’s biggest aid recipient, and one of Africa’s most food-insecure nations. Simultaneously, Ethiopia is one of most militarized nations on the continent, with a history of both internal and external uses of force.

More recently, the forcible resettlement of semi-nomadic groups in the western Gambella region has troubling implications for a nation with high rates of malnutrition and food insecurity, whose citizens overwhelmingly rely upon small-scale farming.

In Ethiopia, the average cost in USD for leasing a hectare for year ranged from $1.25 to $10 before 2009, increasing to $26-$42. While urbanization is changing the population makeup, land deals are still salient for the 83 percent of Ethiopians who are rural dwellers. The increased use of Ethiopian land for biofuel diverts land from food production which is especially important for a country that has consistently been Africa‘s biggest recipient of food aid.

As more Ethiopians become dependent upon the global food market, they also become more vulnerable to fluctuations in prices. Food prices in Ethiopia have recently shot up 50 percent, while the Ethiopian Birr has been devalued in light of the nation’s import-oriented economy. This is in addition to the fact that when food prices spiked in 2008, 6.4 million Ethiopians became dependent upon emergency food aid (this number had dropped to 4.9 million by 2009). Taken together, these factors pose a grave threat to the food security of a nation already dependent upon food aid.

While 10% or Ethiopia’s mostly-rural population (or 7.8 million) is dependent upon food aid, the government has forcibly resettled 70,000 semi-nomadic people (many of whom belong to the Nuer and Anuak tribal groups, the latter of which has faced a history of violence and discrimination in their ancestral homeland) in the western Gambella region as part of a “villagization” program, threatening assault and arrest to all who resisted.

The Ethiopian government currently plans to relocate 45,000 households in Gambella by 2013. The Human Rights Watch (HRW) alleges that this resettlement program is part of a plan to relocate 1.5 million people in Ethiopia in order to lease 3.5 hectares to foreign investors. In the last two years, the Ethiopian Ministry of Agriculture has rented out more than 350,000 hectares to 24 investors for large-scale commercial agricultural operations.

According to the Oakland Institute, a policy think tank based out of the United States, the Ethiopian government has set aside 42 percent of Gambella’s land for investment. The Oakland Institute’s publication “Understanding Land Investment Deals in Africa: Ethiopia” further sheds light upon this violation of basic human rights. In Gambella land investment deals with foreign investors have enabled the cultivation of soybeans, biofuel, palm oil, maize and sugarcane for export.

According to United Nations (UN) World Food Program (WFP) estimates, approximately 84,000 individuals received food aid in Gambella in 2010 (out of an estimated population of 310,000). While the region is rich in natural resources, food insecurity remains a problem in Gambella; a problem that is possibly exacerbated by land grabbing.

In conclusion, the global land rush has major implications for small farmers, particularly on the continent of Africa, where formal and informal land tenure leaves them with little recourse in the face of large-scale land grabs. Ethiopia’s small farmers and pastoralists are at risk of losing their livelihoods to foreign and domestic investors’ land grabs, and not only are their livelihoods at stake, but their basic access to food and housing are at risk.

With this, we return to the question posted in the lead article entitled “The Great Land Rush: Land Grabs and Food Security: how can we make these land deals more equitable and beneficial to indigenous people and small farmers?