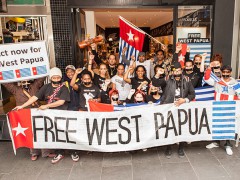 In our fragmented world, one important question that needs to be asked is whether economic imperatives can force nations to overcome their political differences and act in unison to tackle the pressing global challenges of today, such as human rights and climate change? Such goals may seem unrealistic or unachievable – but they are not entirely beyond reach.

In the Pacific Melanesian region, an array of regional agreements have been made to strengthen the political and economic clout of many island nations. They include such platforms as the Pacific Islands Forum, the Asia-Pacific Economic Cooperation (APEC) and the Pacific Agreement on Closer Economic Relations (PACER). But something else is also brewing in the Pacific.

The idea of ‘regionalism’ has worked very well for some nations and this has prompted others to develop sub-regional agreements – like the Melanesian Spearhead Group (MSG) which consists of Papua New Guinea, the Solomon Islands, Vanuatu, Fiji and the FLNKS of New Caledonia, and is a much smaller body than the 16 nation Pacific Islands Forum. Founded in 1988, the MSG is designed to help member states grow through trade agreements, tariffs, tourism, security, and to help nurture respect for each other’s cultures.

Melanesian Spearhead Group, by AKRockefeller, on Flickr.com, CC BY SA 2.0

The Pacific Islands would be better placed as part of a small, tight-knit regional grouping with cultural kinship and more strength and economic resilience against the fall out of financial disasters.

This part of the world is rightly celebrated for its tremendous cultural diversity. From Vanuatu to Papua New Guinea, Melanesians find themselves speaking different languages, acting out different customs and tackling the problems associated with their remote communities which have little or no access to telecommunications and the global market.

Not only does sub-regionalism foster better economic relations but it will also have the effect of improving human rights and governance.

Take the case of West Papua, a region seeking independence from Indonesia. Reports produced by Human Rights Watch are testament to the long-standing history of tension between the Indonesian authorities and West Papua political activists who suffer brutal abuses from the Indonesian military on a regular basis.

There have been moves, however, to raise the issue of West Papua through economic forums.

Late last June, delegates from West Papua went to Fiji to meet the Prime Minister and head of the Melanesian Spearhead Group, Frank Bainimarama to ask for full membership to the MSG. This is expected to be a lengthy process and has already suffered significant delays.

While the issue of West Papua is a political hot potato in the region, its involvement in regional economic and political matters will mean a more inclusive and ultimately more successful regional group in future. The fact that it is even being discussed as a possibility and that West Papua has shown interest in joining a regional group shows that there is indeed faith and hope in partnerships.

The reports of violence and abuse coming from West Papua are gut-wrenching. A solution needs to be found sooner rather than later, and perhaps an economic platform is the best means of achieving this. Economic agreements between these countries will hopefully not only make them more economically resilient but will also address some of the long-standing tensions within the region.

If the Spearhead Group accepts West Papua, it will mean positive developments for the people of West Papua. However, we can’t rely solely on the MSG to liberate West Papua. Most Melanesian countries want a free West Papua too, but the dilemma is that in the effort of trying to free it, they may put their own country at risk as well since this may be seen as “an act of war.” At least it’s something to hope for because this kind of brutal military repression has gone on long enough.

I am from a small province called Tailevu in the Fiji Islands.