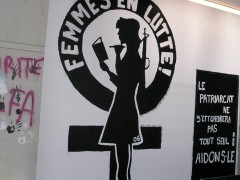 A graffiti in the French city of Toulouse: Women, the patriarchal system won’t collapse all by itself. Let’s bring it down! Photo taken by the author.

Do you think that women should be able to wear anything they want to, without being subject to sexist comments? French housing minister Cécile Duflot thought so when she appeared in parliament wearing a dress in July 2012. It was a floral dress, the hem below the knee and the neckline showing little cleavage, hardly what you’d call revealing. However, the right-wing politicians in the chamber couldn’t contain themselves. As she took the microphone, they started hooting and whistling. One of them, a certain Patrick Balkany, declared later in an interview for the right-leaning Le Figaro (article in French) that they were only whistles of admiration. And, “if she didn’t want us to notice that she’d changed her looks, she simply shouldn’t have changed them”. Furthermore, he also reckoned that she probably had “put on that dress so we wouldn’t listen to what she was saying.”

In 2011 the right-wing party deputy Vladimir Seks decided to challenge a left-wing party deputy Gordana Sobo. What he was challenging, however, was not her work, but her moral values. “You want to talk about morals, Mrs. Sobol? Where is your husband? He is not in jail?”. Before finishing his rant he found important to mention that “she should stick to her pole dance” because the lady in question practices the S-factor pole dance. Josip Friščić, a former vice president of the Croatian parliament after a verbal duel between two female deputies, Ingrid Antičević-Marinović and Karmela Caparin in 2011 found it amusing to say: “You see, you wanted the right to speak for women, and you can see now what it looks like when you both start speaking at once”.

To my big surprise, France isn’t more progressive. There is a French version of a women with a sausage. There are two lightly dressed attractive blonds hugging a young boy (?) whom they appear to find irresistible because he has a supermarket card that gets him special treatment (?). The commercial for the 11 Football Club store shows an apparently naked woman kneeling in front of a male customer while she asks him if he is happy. A wider shot reassures us, showing that she isn’t really giving him a blowjob, just helping him try on shoes (which I find sexist as well).

And, the cherry on the top is a series of rent-a-car commercials exploiting the old cliché of “women who don’t know how to drive a car”. It shows a car in the sea with the slogan “Yes, we rent to women, too”. And then there is the “Women’s day” special: “Today, more than usually, we rent to women”. Well, thank you gentlemen.

Guilty of sexism: Croatia and France

Carrefour is guilty of sexism. The French supermarket chain launched an advertisement campaign for female football, promising clubs “a make-up kit” for each of their players. As a French feminist blogger Marie Donzel remarked: “If I were a football player, I would rather have some sports equipment”.

But Carrefour didn’t invent anything new. Before that there was the French Football Federation with a series of commercials promoting female football after the French female team qualified for the World Championship in Germany.  Five different billboards, five female characters in football dresses and slogans “For once you won’t shout when you see another girl wearing the same clothes as you”; “If everyone is looking at you, it’s not because your make-up is messy” or “French football needs more women like Adriana”, Adriana Kerembou is a leggy blonde model.

Like in France, Croatian sportswomen might be praised for their success, but they get more media coverage if they also possess good looks. The coverage of the last Olympics in London showed this clearly. When basketball player Antonija Mišura was awarded the title of “the most beautiful sportswomen of the Games” (on the American website Bleacher Report), the Croatian media became keenly interested in what she likes to eat, what she wears in the evening, what make-up she uses, if she wants to get married, and how many children she would like to have one day. Her actual basketball career wasn’t that interesting, apparently.

4. Words don’t come easy to me

France: When I started learning French at university, I was surprised when I discovered in my third lesson or so that all the “good” professions have only a masculine form. Especially because French is such a complicated language with numerous different endings for male and female adjectives and nouns.

Dentist, engineer, sculptor, painter, doctor, writer and author, boss…all have only male forms. Things have started to change, so nowadays some brave women and avant-garde men tend to put an -e on the end of “auteur” and “écrivain”, changing the masculine “author” and “writer” to the female form. The French Language Academy, the industry that curates the language, appears to be more resistant when it comes to change: new female forms are still banned from the official documents, newspaper articles and school papers.

In Croatia, the language policy is a bit different: language purists struggle to differentiate Croatian from neighbouring langages, so language policy has been through various changes (I-don’t-know-how-many-times-and-which-grammar-to-use) since Croatian independence. But in Croatian there is a female word for judge, doctor, author… in short, for every single noun that is “man only” in French.

In both countries, women are seen more in terms of their looks than for the work they do. Even though in Croatia I have seen some progress, women are still perceived mostly in terms of their roles as mothers, housewives and wives/girlfriends/hot women. France is maybe more advanced in this respect, but égalité is still far from being achieved. Moreover, when women fight against sexism, they are often derided as “lesbians” and “frustrated”. And when they demand their rights, they get reactions such as “why do you make a fuss about this when there so many more important things to fight for?”. As long as this attitude doesn’t change, we – men and women together – should continue to make a fuss about it.