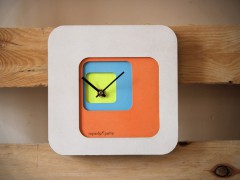 Sometimes names say a lot. So it may not be just a coincidence that Antoine and Charlotte live exactly at the intersection of the rue de Commerce and the rue de l’Abbé Groult (Abbé means “abbot”). Building on Antoine’s design talent and Charolotte’s business acumen, the couple launched their own start-up earlier this year, in April. However, when I entered their apartment on the second floor of an elegant building in the 16th district in Paris, it was not like entering a brand new loft surrounded by minimalist design objects bathed in sparkling white light. For once, this is not the story of high-tech nerds but one of easy going, chilled out people who don’t want to make money for just for money’s sake. As the names of the two streets where they live suggest, their start-up is a heady mix of commerce and tradition. They produce clocks. Just handmade, colorful, ready to be personalized clocks.

France is the second strongest economy in the eurozone, the third industrial economy after Germany and Italy. But France is also the ideological guide of European civilization. And something of the old French  “grandeur” still lives on in the spirit of the young people of this country. You can hear it in the chat of the guys and girls hanging around in the early evening in the cafés of the rue Faubourg Saint Denis, talking about their future projects. Someone called them the crisis generation: the young people who left university after 2007 in the midst of an economic  downturn and were constantly urged to move abroad for work. But they stay put. Just like Antoine and Charlotte.

The “Port Saint Denis” is the starting point of Rue Faubourg Saint Denis, one of the most crowded streets of Paris and a favorite meeting point for young people after work. Creative Commons Licence, Till Krech

“Frightened of the crisis? We were born with it…”. Antoine is calm, modest with eyes like those of  an old wise man. Charlotte’s voice, on the other hand,  is a trill. “Our mentality is much more a business mind than that of our parents. We prefer to create by ourselves, not to follow what employers tell us to do. This is why we are building our own business”. Micro-enterprises like that of Antoine and Charlotte contribute a staggering  €223 billion to French GDP,  more than the small and medium-sized enterprise sector does.

Their clocks are simply beautiful. They were recently mentioned in the fashion magazine Glamour and the couple were invited to the Entrepreneurs party at the ESCP business school  in Paris two weeks ago. But they have gone further and have now entered the global marketplace with their clocks. With four of them sent to Israel and a couple to the United States, they have made the first small step into the global economy. Yet this is a place where they can’t imagine their future: “People realize that there is a special effort behind our work : only recycled materials and European mechanics”, says Charlotte.  “We see ourselves more as artisans. We are interested in the human relations our job creates. Could I ever employ people and just run a factory? No, I don’t think so”. Antoine and Charlotte really don’t see the global economy as a threat to their work as they have found a niche: a local market interested in the materials they use and the passion they put into their exquisite objects. For a second round of production scheduled to start in March, they launched a crowd funding campaign on the web platform Kiss Kiss Bank Bank. They collected more than 3000 euro in ten days.

Antoine explains his business philosophy to a visitor at the ESCP business party, Alexander Damiano Ricci

The  French world of SME continues to feel the impact of the economic crisis. For some it doesn’t seem to be a problem of “too much regulation”. On the contrary, according to the EU Annual SME Performance Review,  “French SMEs continues to benefit from good framework conditions for trade, an administration fairly responsive to the needs of the small businesses, and a comparatively fast transposition of EU law and access to state aid and public procurement opportunities”. The same report states that there’s a lack of leverage of new green markets opportunities and a general “lower intensity of entrepreneurial activity”. This may be true for the old generation – but certainly not for the young one and people like Antoine and Charlotte.

My name is Alexander Damiano Ricci. I’m a 25 year old graduate with a passion for journalism. I’m working as web-editor for www.Cafébabel.it in Paris. I obtained my Bachelor in Political Science – International Relations in July 2010 from the University of Rome III. In december 2012 I graduated at the Unviversity of Milan and obtained a Master degree in Economics and Political Science – Economic Analysis and Policy. I have attended a school in “International Affairs and Multimedial Journalism” in Rome, at the “Fondazione Lelio e Lisli Basso Isocco” and worked at “left-avvenimenti“, a national weekly magazine dealing with politics, econmics and culture.