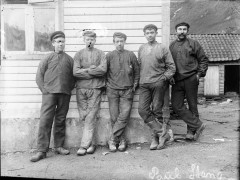 Workers used to be the most valuable resource of any industrialized country. Photo: Paul Stang

No good can come of it when proper planning is lacking is how we could sum up the past 20 years of Romanian industry.

Until 1989, Romania was the fourth country in the world that aimed to produce all its goods domestically. Yet between 1990 and 2012, Romania has lost 3.85 million employees in the industrial sector and factories are still shutting down and people are still losing their jobs even as we speak. Why has this happened?

Up to 1989, Romania did not compete with any other market. Communism made us a closed society as though we were the only country in the world. But after 1989, we discovered that we can import and export goods and that some imported goods might be cheaper than home-grown Romanian products. This is the case of Panasonic, one of the first international businesses to arrive in Romania whose far keener prices completely wiped the Romanian electronics industry from the local market.

Yet foreign arrivals were not the only reason for the start of a wave of factory closures: improvements in technology brought more and more job losses while lack of foreign investment caused the few specialists we had to leave for better paid jobs in the West. At the same time, the disappearance of certain industries turned mono-industrial cities in Romania into ghost towns.

But we also have examples of good practices when it comes to privatization. One of the most famous Romanian companies on the market is Dacia, the car producer. Not only has it survived, it has also created new jobs and is helping to drive economic growth in Romania. In 2012, Dacia sold almost 360,000 cars all over the world – with sales 4.8% up on 2011.

My own take is that worse than factories closing down and people losing their jobs is the thriving export of … brains. From 2007, when Romania joined the EU through to February 2013, no less than 28,000 doctors and 17,000 nurses applied for a job in another country and 80% of them actually packed up and left. With a Romanian salary at around 300 euro, doctors and nurses can get ten times more somewhere else, so who wouldn’t leave in their shoes? Consequently, Romania is suffering from a massive lack in trained medical personnel and the future doesn’t look bright at all if we don’t stop the hemorrhaging of our best and brightest talents. In the first three months of 2013 alone, we have lost 580 more doctors while 250 more are waiting for answers from abroad about their applications.

In a common market, Romania found that it couldn’t export as it used to because its industries simply weren’t competitive enough. Nowadays, Romania imports pretty much everything from matches to fruit to shoe cream. The countries we mostly import from are Turkey, Greece, Spain, Italy, France, Germany and Hungary.

In the 1980’s we were an industrial and agricultural country; today all we are left is dreams of the good old days where we often forget that our economic self-reliance came at the price of severe restrictions on our individual liberties. I’m glad that I didn’t know these times as I was born in the mid 80’s so there is nothing for me to sob about. But I do realize now that unless we develop coherent policies aimed at increasing our national income with the resources offered  – including by attracting and retaining qualified personnel in a concerted “brain regain” – we will end up by being just an import marketplace.