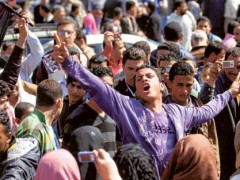 Arab  Spring, Act I: the seduction of straightforward revolutions.

In December 2010, Mohammed Bouazizi, a street vendor in Sidi Bouzid, Tunisia, set fire to himself to protest against his treatment by the authorities when he tried to get back the wares they had confiscated. . This self-immolation in the name of human dignity sparked local protests all over the district of Sidi Bouzid, but unlike the previous series of uprisings in Tunisia, these were able to start a nation-wide movement that put an end to the 23 year rule of dictator Ben Ali  on January14 2011.

Inspired by the success of what is now legitimately called the Tunisian Revolution, Egyptian youth movements announced January 25 as the date when they would start to follow in Tunisia’s footsteps.  That date marked the second successful chapter of the Arab Spring[1] and lead to the fall of the 30 year old Mubarak dictatorship.

If Egypt was the first country where young people planned a Tunisian-like uprising, calling for the end of the regime and succeeding in their purpose, things did not go that straightforwardly in other countries. After Mubarak’s resignation, plenty of  youth movements in Arab countries planned a date around 17-24 February to start a nation-wide uprising. ).

The Arab uprisings that ensued all had a very legitimate will to freedom yet labored under the illusion that their struggle would be as easy and relatively pacific as it had been Tunisia. From February onwards, we shifted from an easy-to-follow scenario of “one country per month revolutions”, with huge media coverage for Egypt to an explosion of a dozen of similar such uprisings in different areas across the Arab world.

In February and March 2011 Arab-spring related demonstrations took place in Libya, Bahrain, Yemen, Syria, Algeria, Kuwait, Saudi Arabia, and even in supposedly moderate countries like Morocco and Jordan. It seems that the same template motivated all these demonstrations: “it worked in Tunisia, it worked in Egypt that followed Tunisia, therefore it will work for us”.

Up to now, it seems that the former are sinking their countries in bloodbaths while the later have such strong pacifist and moderate aspirations that they gave their regimes ample opportunities to anticipate and counter the protests by cosmetic reforms.

Unlike the four weeks it took for the people of Tunisia to topple their regime, the post-Egyptian Arab revolutionary movements have now been going  for five months and none of them has yet achieved its initial objective.

–       Algeria: On December 29th 2010 protests started in Algiers over the lack of housing, making it one of the earliest Arab-spring related events. This was followed by series of protests in January and February 2011.

In mid-April, Algerian President promised a revision of the constitution to push for democratic reforms. Meanwhile, the protest dynamic is on a downward trend in Algeria. Yet Algerians, even the young ones, remember the civil war in the 1990s and aren’t ready to go all the way in what is a very unsteady truce in the country

–       Morocco: the initial objectives of the February 20th movement (link) are listed in the form of 20 demands of which the first one is the election of a constitutional assembly to write a constitution for a democratic parliamentary government.

Faced with these legitimate claims, instead of organizing the election of a constitutional assembly, the King appointed a commission under his orders to propose a new constitution that was voted in on July 1 2011. The regime says that turnout was at 73% and the percentage of yeses as high as 98%.

The February 20th movement does not recognize the referendum and organized nation-wide protests on July3, but the regime’s reform seems to have significant support from a large part of the population who are satisfied with the status quo.

A BBC report qualified the referendum as “corrupt” while Human Rights Watch does not foresee any major changes coming from the new constitution.

Even if  it is true that the February 20th demonstrations are not as grassroots as previous ones held in Morocco in 1963 or 1984, this is still the first time Morocco has seen nation-wide protests for institutional reform.

–       Jordan: in February, King Abdullah fired the unpopular government. For more on the Jordanian situation, read this article by the Associated Press.

–       Kuwait: Sparked in March, the uprising in Kuwait has been so unsuccessful that it has disappeared from sight in recent news.

–       Bahrain:  Initially starting with demands for human rights, the Bahraini uprising did not threaten the monarchy. Rule of he Shiite majority by the Sunny minority was an important root cause. Protests were peaceful until the police raided protestors sleeping at the Pearl roundabout in Manama killing three of them. This shifted the focus of the uprising from demands for human right to calls for an end to the monarchy. The situation evolved in a complex manner involving intervention by the Saudi army. Now that the state of emergency is over (June 1), several rallies have been staged mainly by the Shiite community calling for the release of prisoners and greater political representation for Shiites. Nobody is now calling for the end of the monarchy.

–       Libya and Syria: the bloodiest and most tragic events of Arab spring took place in these two countries. While Libya has seen the complexity of its situation increased through NATO intervention, no intervention took place in Syria where the regime seems to be less fragile than in Libya where revolutionaries are already controlling many areas in the country and some embassies across the world.

–       Oman: On January 2011, a few hundred people took to the streets of this Gulf country-demanding salary increases with scarcely any political calls for institutional reform. . An escalation of violence happened in February. The Sultan reacted by dissolving the Ministry of National Economy and important social measures were taken, maybe the most considerable of all in the Arab spring: 50 000 jobs have been created in the public sector, one fifth of them in Royal Oman Police.

An atmosphere of disillusionment is natural in a revolutionary process like the one taking place in the Arab world. Nevertheless, there are many achievements that youth movements should be congratulated for; the most important one is an irreversible increase in liberty of expression while self-confidence of the people in their power to make change is higher than ever before.

Act V: Are the pioneers Egypt and Tunisia in a safe and secure process?

Probably a key parameter in the motivation of other Arab spring related events, democratization of Tunisia and Egypt is a central issue, as the risk of falling back in dictatorship is not avoided yet. If in Tunisia a constitutional assembly is to be voted for in October, Egypt has only tinkered with the standing constitution introducing minor reforms which voters largely approved.

From a personal perspective, I think that the risk of returning to dictatorship has been completely avoided in Tunisia and is very unlikely to happen in Egypt. This point about ‘Act IV’ will be developed in another FC_org piece that will focus on the new form of governance and enhanced citizen-control happening now in both countries.

[1] Successful here means success in changing at least the head of state or the form of the regime as a short-term objective.