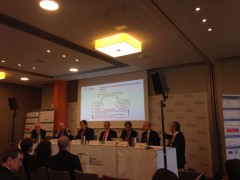 One of the most interesting and eloquent panels I attended this year at the GES was, surprisingly, one chock full of economists. Usually when you attend a lecture by economists you expect it to be quite occult and verbose, not unlike a philosophy lecture only with more focus on the nature of markets than the soul. This lecture was occult enough to qualify as an economics lecture but the varied nature of the panel and the serious but witty way they handled the topic made it quite easy to follow.

For, you see, while the “Future of Central Banking and Financial Market Reform” (video) did have quite a lot to say about central banks, quantitative easing, tapering and macroprudential mechanisms and policies, it also delved into some interesting if uncharted waters, those of the threat of deglobalization and the desire of emerging markets to be given a bigger seat at the financial table.

The panelists were a lively bunch, cracking jokes and making humorous analogies in between discussions about the dissolution of international trade and the possible if not probable U.S. debt default coming in about two weeks’ time. The main question was whether in this post QE-world central banks burdened with all these assets should consider this new state as a temporary affair, as it has always been so far, or as a complete paradigm shift, and what’s to be done in either case. The general consensus was that QE was a good thing in its time but that we should slowly taper back to a state of pre-crisis normality about what a Central Bank should do, that is inflationary price control and not juggling market stability, price controls and now – the latest addition to the job description – maintaining growth through currency emissions. Whether such a return to prelapsarian times is possible, however, is still up for debate.

One particularly important issue that I, in my euro or western-centric perspective of the crisis, have never considered is the impact that QE has been having on developing economies, many of whom are net creditors to the very western economies that are busy stirring up the waters. So a good point was made that while it is true that Central Banks are fundamentally “self interested” bodies, overlooking the interests of the state they represent, if the central banks of developed countries continue to wage these so-called ‘currency wars’ there will be no incentive for developing countries to continue that particular relationship and this will inevitably lead to de-globalization.

While the end of globalism is hard to imagine because globalization is so deeply engrained in our social fabric that it is next to impossible to extricate, this is still a prospect that merits consideration. As Andrew Sheng put it, the western world has the vast majority of capital and leverage but the developing world, which is a net lender, has 60% of the population and 60% of the growth potential. If the West doesn’t put its affairs in order and continues to pass on its problem to the developing world, central banks will start to think increasingly in terms of national rather than global interests. Let’s hope it doesn’t come to that and, above all, let’s hope the U.S. doesn’t default on its debt on the 17th or we will have a whole new and significantly worse set of problems to contend with.