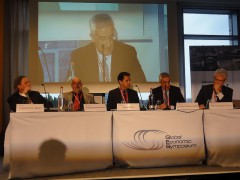 Where are the end user interests in the battle between infrastructure providers and content providers?

The Internet was born in a clash of cultures. This, in turn, produces a clash of policies when it comes to the Internet regulation,

stated one of the panelists, while explaining the exceptional nature of the Internet and why there is no legal regulation. According to the panelist, this lack of regulation allowed “innovation without permission,” which meant that neither Google nor Facebook creators asked for the permission to create their game-changing services. Therefore, the principle of Net Neutrality should be defended in order to keep the innovative nature of the Internet unaffected.

Yet, there are certain forces behind the attempts to change the present order of the things. Network operators (Internet Service Providers and backbone operators) lose revenues, while it is the content providers and search engines (in many parts of the world just one search engine) enjoy the increasing cash flow.

As the networks need to be constantly upgraded (according to one of the panelists in the US alone more than 350 bln US dollars were spent on these purposes), some panelists have expressed a will to a traffic price regulation depending on the services.

In this argument, one of the panelists had expressed a very important point:

We have a conflict of principles here. It’s a serious question – which principles shall we choose. Those of providers or of end users?

When I tweeted this quotation, my Twitter follower from Nairobi @the_mullah immediately responded:

i’d rather those of user because without the user,the provider would b non existent.

As governments are becoming more concerned with the literally revolutionary (ask Wall Street bankers or president Mubarak) consequences of the networks and free information dissemination, the more calls arise for a tighter control.

The Internet technology in its core allows such control, however, it is important to limit the control measures such as deep packet inspection (DPI – filtering technique that allows Internet Service Providers to scan through all traffic sent and received), possible “Kill Switch” (a set of measures that would cut the Internet in one country from the global networks).

Some panelists proposed an Internet Constitution that would list the Internet rights neither governments nor Internet Service providers should violate. Such a Constitution would be the base for further regulation (see the common approach at FutureChallenges.org wiki).

One of the panelists, however disagreed:

There is a serious contradiction between centralised government and de-centralised structure Internet. We need to invent something new!

Proposed “Something new” is the usage of the form of the Request for Comments (technical documents used at the dawn of the Internet to describe proposed effects and behaviors of the new Internet-related protocols, methods, research, etc) instead of laws or constitutions. Since RFCs have been working for several decades as the main basics of now huge networks connecting almost 30 percent of the population, maybe it is an approach the Internet really needs?

Finally, one participant, commenting from the floor had compared the Internet to the living system, and asked a truly essential question:

“Certain systems we need to understand the rules before applying any changes. Shouldn’t the same be applied to the Internet?”

All the effects of the internetnetworked humans and their complex interrelations with the governments, businesses, other humans are yet to be discovered. One thing, however, is evident: “the Planet’s Operating System” (term coined by one of the participants) is here, and the stakes are high.