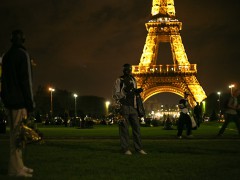 The world is moving. Now, probably, faster than before. Ukranians and Belorussians move to Poland, Poles and Lithuanians move to the UK and Germany, Russians move to the United States and Australia, Tajiks and Uzbeks move to Russia. The probability that in 50 years the ethnic structure of many countries will be much different than it is now is definitely higher than zero.

The ability to handle the 21st century ‘great migration’ and to keep high standards of welfare but more importantly human dignity will depend on the policies the governments will choose for the future.

We do not choose our Motherland and our parents, but we choose friends and the place we live.

I was born and received education in Moscow, Russia. I’m an ethnic Russian and a rooted Muscovite. Starting 2008, however, I’ve moved to Poland. My wife is Polish, so after living some time in Moscow, we moved to Poland, simply because the life is more comfortable there.

My case is not very typical: it is neither labor nor the migration caused by political reasons. As I work mostly online, I don’t have problems with employment at some particular place. Since Russian and Polish languages are very similar – I don’t have serious language issues, either. Finally, it is definitely easier for me to make papers in Poland than for my wife to do the same in Russia.

But when it comes to identity, however, even after three years I have certain problems with identifying myself with Poland.

Maybe it’s just me but it’s also the look in the eyes of bank clerks, customs officers, airline attendants (I travel quite a lot so I have to deal with those often). “Alexey Sidorenko” they read in my ID. “Obcokrajowiec (pl – Foreigner)” – what I read in their eyes. The same look I receive when I accidentally make a language mistake while communicating with a plumber or speaking on the telephone in my native tongue in a public place.

My example, however, belongs to the type pejoratively attributed as a ‘white whine‘ (by the way, check out a quite entertaining blog about this phenomenon). The problems of a Sub-Saharan guy on the picture above (picture shot just few weeks ago while being in Paris) are probably much more serious. As they’re for France, his hosting country.

But both me & and the Eiffel-tower-seller share a great deal of sympathy (if not love) for the places we’ve moved to. In other case why would we move here?

This is why the policy proposal that the governments “should abstain from demanding an exclusive identification of immigrants with the destination country culture and society” seems reasonable for me.

As opposed to contracted temporary migrations (a competing solution proposed at the panel), the inclusive policy towards the immigrants allows the newcomers to contribute more in the destination country. Some historical emigrant countries like Canada, the United States, Australia already promote a double identity. But, as one of the participants, has asked can Europeans accept complex ‘hyphen’ identities like Greek-Canadian?

“You can come for our skiing season and in a year earn as much as you earn in the whole year. But then you’d need to leave, you can’t stay.”

To my mind an approach like this neither does solve the problem, nor does it make the situation both of migrants and newcomers better. In the situation where the competition for labor force and talent is becoming increasingly important, only very rich or short-term oriented (or both) countries can afford to consider this kind of policy.