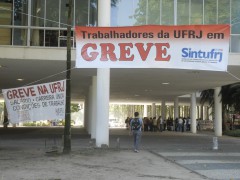 In search of better wages and an appropriate career plan, public officials from various Brazilian federal universities have been on strike for more than seventy days. Practically the only legal protest right, the strike has joined teachers, servers, and students in one voice.

The most that the government has proposed so far is a table setting of wages and not actually a restructuring of the teaching career.

More than a wage increase, the big battle is for an appreciation of education. It is not enough to increase teachers’ salaries; it is necessary to invest in structural improvements. My lovely Fine Arts School of the Federal University of Rio de Janeiro, where I earned a degree in Visual Communications and one of the best schools in the country, has been falling apart for some years.

More than money in the pocket, the group is fighting for the right of access for physically disabled people: have you ever seen a university where the poor have to juggle a wheelchair?

Currently, in the vast majority of public universities poor students have to be lucky enough to get a spot in university housing, even though they may live three hours from the university, because there are not enough slots. Nourishment is not a guarantee for students either, who beyond spending on meals and transportation, have to bear all the expenses associated with their studies — including the cost of the diploma. In Brazil people say that public university is only for the rich. It seems like a joke, doesn’t it?

Speaking of jokes, the fellows have to survive on a grant of R$360.00, the equivalent of $178 per month, to cover all the above costs. In addition to being a student, you must be a magician.

As Brazil prepares for the Olympics, the students practice a daily Olympics: ornamental jump to go up the stairs with wheelchairs, acrobatics with the grant aid, and “graduation” training hurdles.

When the country needs to invest more in skilled manpower and cutting-edge research is when the government decides not to invest, or more accurately, still does not invest, because this is a history that goes back many years, the fairy tale of Brazilian education.

Education should be the mainstay of a nation. Education is the brain of a country; without it we will have brain death with no right to organ donation.

Economically speaking, education should be the first great source for better economic development of the country, shouldn’t it?