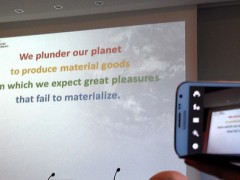 The introductory session of the GES in Kiel felt at times like something out of a Hollywood feel-good movie. With a kickoff speech from the Kiel Institute’s President Dennis Snower focusing more on personal achievement and betterment than international growth and trade, it seemed that this gathering of business leaders and academic luminaries was more of a new age retreat for men in suits.

And yet the besuited assembly made quite a bit more sense than a hippie retreat and, surprisingly, even had more interesting characters. With a diverse panel ranging from the chairman of Operation HOPE, John Bryant, a man who rose from the streets of South Central LA to become one of the leading voices in the fight against poverty in the US, to Nobel laureate Martti Ahtisaari, and the CEO of Deutsche Bank and Nik Gowing of BBC fame, there were often wildly divergent opinions put forth. Even so, there was one common question, the main question of the entire conference – How do we redefine success?

Success is an elusive concept to grapple with, one that lends itself easily to that famous definition of pornography, “You’ll know it when you see it”. Yet it seems that we are increasingly reconfiguring our expectations of success to focus on its material trappings to the exclusion of all else. As John Bryant elegantly phrased it, we have come to focus on its by-product – money – rather than on actual ways of achieving success. This is something that can be seen in all sections of society and that is reflected in the changes in our culture.

Yet, as sociological studies have shown time and again, an obsession with material aspects leads to a decrease in our general level of happiness. That’s because – and please bear with me if this sounds a bit new-age-y – happiness by material gain is fleeting and illusionary. Accumulation of wealth can indeed lead to happiness and personal fulfillment but it is happiness of a transitory kind, eroded by the ebbs and flows of the economy and tainted by the inevitable gains our competitors make.

So what do we put in its place? The solutions vary. As Bryant said, money might not be everything, but it’s a great start for many of the working poor. Perhaps a more inclusive approach to our own happiness is suggested by  Prof. Snower who sees it not just in terms of success, but of personal improvement, increased awareness of the world around us, mutual respect and giving back from our own privileged position. Perhaps what is needed is a “theology of economics” as Robert Johnson argues, since economics is too much concerned with the ‘hows’ of accumulating capital and not so much with the ‘whys’.

Yet one thing is certain: Capitalism and democracy have served us quite well for the past two hundred years. The advances we have made in both wealth and liberty have been incredible. But we do need to find a way to make wealth work for everybody, a way to make all markets grow without take-from-the-rich rabble-rousing or oppression of the poor by the wealthy. As Bertrand Russell put it, “The only thing that can redeem mankind is cooperation”. And that is what the 2013 GES is all about.