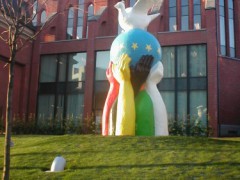 This post was produced for the Global Economic Symposium 2013 to accompany a session on “The Future of Europe.” Read more at http://blog.global-economic-symposium.org/.

Over and over again, soothsayers and cut-prone economists have predicted the demise of the Eurozone and the breakup of the EU. Yet, in this time of turbulence, infighting, and austerity, the EU as an organization has held fast.

EU Solidarity (embodied in the above monument) is crumbling both at the State and individual level as financial issues deepen. Photo of Bernard Romain’s Statue of Europe (Unity in Peace). Picture published by Wikimedia Commons user Idette under a CC BY-SA 3.0 license.

Leaving the organization aside, at the level of the people, things are getting shakier than ever. Since before the Rome Treaty, the main purpose of the Union has been to “keep the peace” between European nation-states. While there certainly isn’t a threat of armed conflict in Europe anymore, the last few years have shown that the EU is far from the big happy family everybody expected it to be. Iceland has shelved its EU application pending a referendum and is in deep dispute with the Union over fishing quotas, and the newly admitted Croatia is facing severe criticism from Germany over a recently passed law. European solidarity is next to nonexistent with the economically developed North pressuring the faltering South into brutal and ineffective cuts. And there is even more dissent coming from the population.

The vein of euroskepticism, which has been there since the start of this great experiment and has manifested itself most spectacularly in the failure of the EU constitution, has been gaining strength in the unfavorable economic climate — and politicians have been quick to capitalize. The result? While in 2007, fifty-two percent of European citizens thought their best interests lay within the EU, now almost two thirds have moved into the euroskeptic camp; the UK public leads the way with a rate of almost seventy percent and calls for a withdrawal referendum.

Of course, a good deal of this climate of anger is anchored in a (real or perceived) North-South schism. Europe is evolving at two speeds. With unemployment levels skyrocketing, especially among the young, and a sense of “paying other people’s bills” in the European North and outrage about “outside-imposed cuts” in the South, there is much to be angry about in the EU. Is it all strictly economics? In my opinion, apart from the endlessly debated economic measures, there is also a “social front” for the EU to tackle if it intends to keep itself together and build a European identity.

One of the core problems in today’s Europe, mistrust amongst the member states and a lack of a “European” identity, is being tackled in an innovative way. The very same youths who are having a hard time finding a job are finding new, fully paid opportunities to meet other young EU members in youth-exchange workshops and seminars supported by EU money. Almost 50,000 participated in 2009 alone, and the numbers have been steadily increasing. The Erasmus and Socrates Programmes have been even more successful in facilitating exchanges. EU money also pays for the 2000 or so internships awarded each year by the Parliament and Commission, an intelligent way of creating an elite class of multinational, EU-friendly bureaucrats. It seems to be working, even in the UK.

Alas, appealing to the young, the bureaucracy, and the elites has never been the principal problem for the EU. It’s the regular people — those who voted down the Constitution and are increasingly voting for radical anti-EU parties — whom the EU has to cater to in some manner. These mostly middle-aged euroskeptics (and in the Southern countries, unemployed youths) are unmoved by the “European Dream” and are primarily concerned with financial issues and jobs, both growing problems for the EU. In the end, it seems that even on the identity-building social front, prosperity is the best weapon in the EU’s current arsenal. And yet, with ongoing political squabbles and still no central fiscal policy that is both coherent and effective, one has to wonder where Europe’s saving grace lies or, indeed, if there really is one.