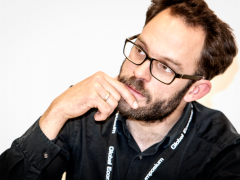 FutureChallenges contributor Jamie Stark sat down with Daniel Domscheit-Berg at the Global Economic Symposium in Kiel on 1 October. Domscheit-Berg is a technology activist in Germany and abroad, founder of OpenLeaks, and in 2011 was named by Foreign Policy magazine in its list of top global thinkers. That same year he published his book Inside WikiLeaks: My Time at the World’s Most Dangerous Website cited numerous times by the interviewer in his Iwanter Award research thesis on the ethics of Cablegate. Today Stark and Domscheit-Berg discuss transparency, both online and in the real world, as well as the future of the Pirate Party following recent German elections and the upcoming Dreamworks movie The Fifth Estate.