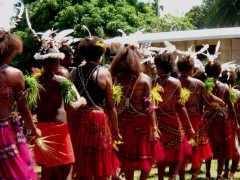 The traditional lifestyles of the Pacific Islanders are an epitome of how growth can go hand in hand with sustainability.  Growth for them is not about economic acceleration. Growth is more intangible in nature; personal growth, cultural growth, spiritual growth and collective growth. Growth happens within the natural limits of what the land, and therefore earth, can endure.

My story begins in the islands of the South Pacific, where I have spent the past decade learning about the possibility of ‘another world’.

A world where people live in a community and not an economy, a world where we give more than we take from the land, and a world where our ultimate focus is not ourselves but maintenance of ecological harmony and peace.

While the consumerists in capitalist societies keep the international economy afloat, some people in the Pacific Islands are attending to a much more important job: keeping the earth alive.

I’ve had the privilege of learning about what land means to the Pacific people by talking to elders, land owners and families in Samoa, Fiji, Papua New Guinea, Solomon Islands and New Caledonia.  They opened my eyes to a more ecological and spiritual view of the land, totally different from how land is conceptualised in capitalist societies.

What I’ve learned from my decade-long journey in the Pacific Islands is this:

Land ownership for the Pacific people is not about owning a commodity that can be traded or capitalised.  It’s part of their identity – who they are, where they come from and most importantly, what obligations they have in protecting the land for future generations.

Land gives people a place to live and a place of shelter.

Land provides people with ground on which they can cultivate and grow their own food.

Land provides habitat for flora and fauna, which people rely on for subsistence.

Land offers a form of protection in times of natural disasters, conflict or even climate change.

Land also defines people’s spiritual and cultural identity, and inspires people to nurture their creativity through the creation of art, crafts, music, dance and stories.

Finally, land is what people leave behind to be passed down to their children, a kind of perpetual heirloom that guarantees the survival of the next generation.

This way of thinking about land has allowed Pacific Island people to understand why it is vital to take care of it.  Destroying it – by introducing Western concepts of land – will only result in the demise of human existence and the demise of the planet itself.

Growth in the Islands, Photo taken by Author.

They understand that to keep their land, and thus keep the earth alive, they have to protect it.  Chiefs and elders in each community govern how land and its natural resources are to be used and conserved. Many communities have rules about when people can harvest from the sea or the forest, and the appropriate methods and processes that need to be followed so everyone benefits from and gives back to the land.

Moreover, the collective good is placed ahead of individual gain. People share harvests so no one goes hungry. People let others into their home so no one becomes homeless. Children are brought up by the community, not just parents. When one succeeds, the whole community thrives.

People in the Pacific live a simple yet deeply meaningful life, in sync with the earth’s heartbeat. I’ve experienced it and what a beautiful life it is!

Only then can we discover the possibility of “another world.” I know I’ve found it. I found it right here in the Pacific Islands.