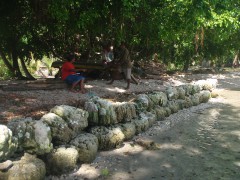 When we talk about healthcare in Solomon Islands, it’s back to the very basics.

My visit to a coastal village in Ngela, Central Islands Province, really opened my eyes to how the absence of proper sanitation affects people’s health and wellbeing.

A coastal village in Central Islands. Photo taken by Author

Getting in before the in-coming tide

I’d been holding off from emptying my bowels for three days and it was time for me to make a big decision: I either hold on for another few days (which was going to be impossible) or just accept the nature’s call and liberate myself from this awkward state of being.

I had no choice but to go and take care of my business.

I grabbed a roll of toilet paper and headed out the door. I walked past some huts where women were sitting down and having a chat before breakfast.

“Morning!” the women called out to me, accompanied with big smiles on their faces.

“…Morning” I responded, with my mouth hardly moving.  My bowels suddenly filled with a sharp pain – I couldn’t have returned a smile even if I tried.

Looking awkward, I pointed to my destination and raised my right hand which was clenching the toilet paper.  The women nodded, and thankfully they understood that I had some business to take care of.

After walking through the bushes and walking carefully on wet rocks, I reached my destination.

The toilet was actually a beach. Nothing more, nothing less.

You have to do your business before the in-coming tide. I remembered one of the women telling me when I first asked about doing business in this village.

I looked around to make sure I was alone. Then I dropped my pants and squatted.

I better do what I have to do before the tide comes in.

Simple but with serious health risks

The working mechanics of the ‘beach toilet’ was very simple: you squat, do your business, then let the ocean tide clean up your mess.

It’s a simple method but it came with serious health consequences.

First, because you are sharing the beach with others in the village, you couldn’t go without walking into someone else’s feces. There was a risk of infection, especially if you happen to have a cut on your foot and was unlucky enough to step into the mess that someone had left behind. Also, there was nothing in place to stop young children from wondering into the ‘beach toilet’.

Second, people in the village were fishing folk and their primary source of food was the sea. People knew not to fish off the ‘toilet beach’ but waves and currents would carry feces to parts of the ocean where people fished. This increased the risk of fatal diseases like diarrhea, intestinal worms, trachoma, typhoid and cholera.

Third, I worried about the risk to women’s safety. I knew from the research undertaken by WaterAid, that globally 1 in 3 women experience shame, disease, harassment and attack because they don’t have a place to go to the toilet. Although the women in the village didn’t report such incidents, I was concerned about the safety of women and girls, especially if they went alone to do their business.

Turning the smelly and messy situation around

To turn this messy situation around, the village needed proper sanitation. Removing feces from people’s food system was the first step in reducing the risk of disease. Second, toilet structures would have to have walls so that people could have privacy. For women, having a toilet structure of some kind would mean being able to go to the toilet safely and with dignity. Third, having communal toilets for the village would mean the ‘toilet beach’ could return to being a place where people could enjoy, recreate and derive their livelihoods from.

The provision of toilets alone wouldn’t be enough to turn things around. Education about the benefits of sanitation and hygiene, how to use the toilets, who manages them and other toilet matters are just as important as providing the hard infrastructure. Ironically, the village already had two flush toilets, funded by AusAID (the Australian Government agency for overseas aid) in their efforts to improve sanitation in Solomon Islands. The reason why people weren’t using them was because they didn’t know why flush toilets were better than the ‘beach toilet’. What’s the point of building toilets when people don’t understand the benefits of using them?

From this experience, I learned that achieving healthcare starts with something more basic than having doctors or nurses. It’s about making sure people have access to appropriate and safe toilets, and they know the importance of clean sanitation.  Put simply, it’s about dealing with the very basics – basics of smelly business. And this is BIG business because worldwide, more than 2.5 billion people live without basic sanitation.