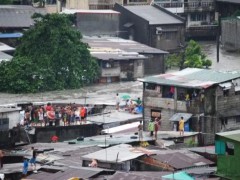 They’re probably gambling with death and disaster, but the families who live in the danger zones of Metro Manila would rather not leave their homes.

The reasons are mainly economic – they work near where they live, hence they would rather turn a blind eye to the hazards of living near creeks and estuaries. This, however, has grave consequences for the rest of the city, because increasing number of shanties lead to constriction of the waterways. Which exacerbates flooding.

There are 580,000 informal settlers in Metro Manila, 105,000 of whom live in danger zones. In 2009, following the devastation wrought by tropical storm Ketsana – where over 400 people died – the then President Gloria Macapagal Arroyo ordered their relocation.

But there was huge opposition.The people demanded in-city relocation, but the proposed resettlement areas were situated in the provinces. The government has to find a way to make the informal settlers leave their homes and relocate without forcing them to move out of the city.

Fortunately for them, when Arroyo was replaced by President Benigno Aquino III in 2010, he approved a five-year-plan for the resettlement of informal settlers in on-city sites.

The success of this plan, however, depends largely on how local officials like mayors and governors take the idea on board. Not all are keen on allotting space for informal settlers in the cities though, as the land could be used for more profitable commercial purposes. Secondly, there have been numerous instances when the recipients of low-cost housing have rented their houses out instead of living in them.

Finding a win-win solution to this problem is the first step in building a new Manila. Development will start by creating strategies that protect the rights of the people to something as basic as decent shelter, while also educating them on how crucial their role is in making cities safe from massive flooding.

A working city has services that answer equally the need for human rights protection and environmental preservation.

Manila can reinvent itself only if it first takes care of the basics, an especially important point given the real threats posed by climate change. Clearing waterways would mitigate flooding, lessen the economic and health hazards that arise from it and create balance in urban design.

Lack of sophisticated planning is one of the mistakes that local officials have to correct – they overlooked the fundamentals of urban planning, where environmental preservation is key. They failed to address the problem of congestion and the demands of migration in harmony with the need to protect the environment.

Only when this is assured, can Manila truly sell itself as a hub for economic expansion.  A developed city always has skyscrapers as a symbol of growth, but having robust housing and a well-cared for environment is just as important and revolutionary.

Manila needs to optimize urban design and embrace an approach that uses sustainable development as a tool to address the needs of the people. In this city that was once ravaged by wars, there should be space both for in-city relocation and revitalized waterways.

In a nutshell, there should be space for a better life.