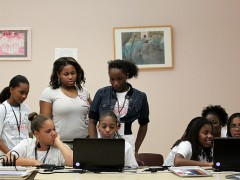 Canada has undertaken initiatives to protect all “racial” groups, through its multicultural policy-making. Because the government has adopted and tries to promulgate the idea that a person’s race is not a valid reason for descrimination, Canada is perceived as a society tolerant of “cultural diversity”. However, in Canada alone there are at least 75 hate organizations that use the internet to spread their views. This allows for the profligation of racist views in new and possibly more efficient ways because the internet is easily accessible by millions of people. Moreover, it is difficult to censor such material because of the technology it employs and freedom of expression rights.

Youths are especially vulnerable to the messages spread by hate groups. Male teenagers generally use the internet more often than any other group; and a poll in the US found that 25% of teens have seen hate group websites. Young people are more likely to view websites because they spend more time than any other group browsing on the internet. Many of these hate websites also specifically target youths, and try to convince them to believe in their ideology. Children and teenagers are attractive targets simply because they are in a stage of moral and intellectual development. Generally, once certain beliefs are ingrained at a young age, these ideas are not easily removed later in life; most likely, they tend to be reinforced.

Hate crime reports suggest a possible a link between the viewing of hate sites and hate crime occurrences. The Canadian Centre for Justice Statistics show that in 2001 and 2002, twelve police forces indicated that 57% of hate crime incidents were about race or ethnicity issues, and visible minorities were overrepresented as victims in these types of crimes. This pilot survey also found that in 83% of the cases, the perpetrators were not known to the victim. The survey also found that the perpetrators involved in these incidents were younger than previous perpetrators. In the past the average age of the men participating in hate crime has been around 29.5 years, but the present average age is 23.6.

Free speech on the internet is almost impossible to censor and this contributes to an even greater effect on the promulgation of racist attitudes. This is the case for two main reasons. First, technologically it is difficult to regulate or disconnect hate websites. Many times, blocking a website is repeatedly undermined by the creation of “duplicates”. Thus, hate sites constitute an almost unstoppable flow of information which aim to instigate racist attitudes. Secondly, from a legal perspective, prohibiting hate sites infringes on the freedom of expression, which is part of the same Charter that guaranteed multiculturalism. The Special Committee on Hate Propaganda in Canada said that some form of speech should be prohibited because today’s society is more diverse, and during times of stress we tend to put the blame for our problems on others.

Nevertheless, thus far there have only been a few cases with convictions. We can see from Statistics Canada that hate propaganda is the least common form of hate crimes reported, whereas mischief and assault are the highest. If hate crime involves an act then it is easier to detect, and if the act involves speech, it is more difficult to prove.  Hate websites are prevalent and can exert significant influence but because of the right to freedom of expression, they can almost never be effectively censored.

Brunilda Cimo is a member of Global21, a student network of international affairs magazines and a partner of FutureChallenges. A longer version of this article was first published in The Toronto Globalist.