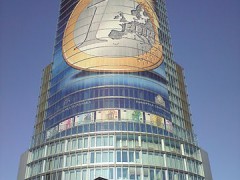 One of the first effects of the crisis on Slovakia – one of the most open, export dependent economies in Europe  – was felt when the country’s rich customers started importing fewer Slovak goods. Similar problems have started to occur again recently, with the slowdown in China, a major destination for Slovak exports, especially cars.

Fortunately Slovakia does not belong to the countries in recession. “If I had to single out the best country and premier in the fight against the crisis, I would have to put Slovakia and Robert Fico in first place,” said Hungarian PM Viktor Orbán.

I think many readers would be interested in a short catalogue of useful measures on  How To Fight The Crisis Slovak Style.

The National Bank of Slovakia, September 2008. Photo by Wizzard for Wikipedia, public domain

Turn to your party sponsors and give them other peoples’ money by way of overpriced state investments. Name it infrastructure projects, this way it will look like it must bring positive effects no matter what.

Be strong at home, servile abroad

Every time you come back from a European meeting, bring home new fresh ideas!

Simply make firing of employees more expensive. Refuse to see and kind of link between hiring and firing costs, Say we do not need seasonal jobs or a flexible job market, it’s better to be proudly unemployed.

If companies start to fire people just before the new employment law comes into force, insist this must be a pure effect of the crisis.

Persuade people that this is the time to be modest

The more educated who depend on the state, like striking doctors and teachers, must be told in no uncertain terms that there are more important things than their wages.

At the same time don’t forget to spend hundreds of millions to push private health insurance companies out of business.

Everything which does not depend on the state deserves higher taxes, fees and more bureaucracy. Say that economists must be wrong when they warn that the highest taxes in the region will have a negative influence on the economy and will result in less taxes being collected.

Reform of the state administration can only be successful if it means creating thousands more jobs for civil servants. Do not hesitate to support them with tens of millions of Euros.

Give strong support also to other jobs in the areas you’ve selected, ideally by using EU funds. When Brussels eventually finds flaws and financial double dealing, don’t worry because returning them the money will be the job of the next government and not yours.

In a situation where a Euro zone bailout is strictly unacceptable, it makes no sense to act responsibly. The best move against the crisis was entering the Euro club of “immortals” in 2009. They do not need to be afraid to fight against market principles.

Slovakia will be reaching its own fiscal cliff at the end of the present electoral term. The presence of Euro safety nets could look rather like a blank check. But postponing necessary measures will be more expensive for the people in the long run. Because in the end, unsurprisingly, it’s the people who will have to foot the bill.