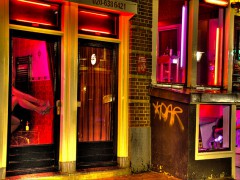 High unemployment and low living standards are forcing women in Northern Hungary to go West and seek work in the sex industry.

Where do they come from?

The current overall unemployment rate in Hungary stands at 10.3% but there are big regional differences. Unemployment in northern Hungary is 13.3% which means it’s hard to find work, especially in small villages, and that wages are often too low to support a whole family. So people try to find other solutions.

Some women decide to go abroad and sell their bodies. Most – though not all – of these women are uneducated and come from an orphanage or from a dysfunctional family. Some of them worked as prostitutes in Hungary before (which is forbidden). Prostitution is closely connected to human trafficking, but in this post I want to focus on those women who have voluntarily chosen prostitution as a means of earning a living. They are the minority among prostitutes.

Where do they go to?

They mostly travel to Switzerland and the Netherlands, but also to other countries in Western Europe.

The Swiss city of Zurich is known as a popular destination in this business. Prostitution is legal and regulated there so sex workers must have a proper permit and pay taxes. Obviously not everybody does so there’s also an illegal sex trade flourishing in the shadows. Still, in such an environment it is easier to get help if needed, as there are services supplied by the city and local NGOs.

The situation of Hungarian prostitutes in Amsterdam is ond of the worst. Photo by Trey Ratcliff on Flickr, CC BY-NC-SA 2.0

But whether working legally or not, there is a definite pattern of life for Hungarian prostitutes in Zurich. Many of them come for short term stays only. They leave their family at home (with the father or grandparents taking care of the kids). They send the money they earn back home, and after a few weeks they return and stay until the family needs money again. How the money they earn is spent depends: there is a broad spectrum of scenarios from a father addicted to gambling to the gradual construction of a new house for the family. How they are perceived at home varies as well, often the husband knows exactly what they do and agrees with it, but in front of the children and outside the family the women’s actual profession is kept as a secret.

The situation of Hungarian prostitutes in Amsterdam, however, is much worse. Researching the topic I came across a phenomenon: the “loverboy” – men who seduce girls and young women and later coerce them into prositution. She falls in love with a guy who lures her abroad and makes her work as a prostitute. He keeps saying he loves her and she believes it. He spends her money, doesn’t let her talk to anyone or go out or make friends, and she is ignorant of any alternative, She doesn’t speak any foreign language, doesn’t ask for help when needed (although help is on offer but she doesn’t know about it) and might even refuse it when given.

In the grip of their loverboys, these Hungarian sex workers in Amsterdan give the cheapest service, have no kind of protection and and are exposed to the greatest risks. Thus, although when asked they say they are working voluntarily, in reality this is strongly questionable. Infatuated with their loverboys, many women are not even aware of the fact that they are victims of human trafficking.

Where are they now?

News reports now say that Hungarian prostitutes have disappeared from the streets of Zurich. The new and much stricter regulations (introduced in August 2013) have made business so much more complicated that it’s not worth working illegally any more. According to the Ministry of the Interior, most of the prostitutes have moved on, probably to Germany. Instead of returning home to the poverty of the villages, they chose the city once more. Hopefully their new situation will be more similar to the one in Zurich than in Amsterdam, although the question of whether sex work should be regarded just like any other job still stirs great controversy in Germany and elsewhere.