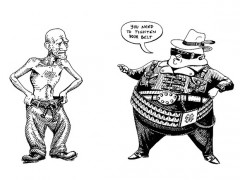 When governments speak of austerity measures, it seems that they do so without really understanding how these policies affect the general  population, and what these cuts mean for people’s lives. If I could have one wish granted, it would be for politicians born with silver spoons in their mouths to experience at least one month in the lives of people affected by the bills they sign with so much apparent ease. They would learn how to live with less.  For those used to balancing billion dollar budgets, the effects of a 5 cent increase in bus fares or taxes on a family would become a lot clearer. And those governments which set  the bad example of spending more than they make would understand how getting out of the morass of debt actually works.  If politicians learned to walk in citizen’s shoes, what a difference it would make to the way they run the government.

Tighten Your Belt by Boris Rasin, in Flickr, CC by- NC-ND 2.0

Politicians learning to live with less would have some good teachers: These past years, millions of Americans have lived through recession, losing their houses, their jobs and their income. Those who managed to make ends meet with less money have come out on the other side.  A slew of blogs on how to pay off debt, live frugally, budget and coupon have become popular among those learning to live with straightened means  – whether it’s to pay off debt, or avoid it and save for the future. More American families are going back to lessons learned during the Great Depression, and putting into practice what Latin American families have been doing for years:  making do, mending and recycling and bartering, swapping and trading instead of endlessly swiping plastic credit cards.

Using less, and using it creatively is a good way to live within ones means, whether you’re a government or a family of six. In Peru we grew up in the middle of a deep recession marked by water and food shortages, and punctuated with empty shelves at stores. We drank from empty yogurt cups, cut beer and wine bottles or empty jam jars. Leftovers were kept in empty margarine tubs, and my mother made jam and jelly that were poured into glass jars which had previously held other food products. Grocery bags were given a second life as trashcan liners. Plants were grown in recycled containers. Siblings bathed together when the water came, and the bathwater was used to water plants and flush toilets. My mom fed a family of six when staples like flour, sugar and milk could not be found. She used her sewing machine to make and mend clothing for us, and hem hand-me-down pants. I know this is an ongoing joke among Latinos, since most of us were raised in this way reusing products that lived multiple lives at home, but I think that it’s  just what people raised with little money do to make ends meet, whether they’re Latino or not. While our family had financial means, buying is not an option when products are not available. We learned how to be thrifty, creative and to transform what we had into what we needed, without needing to buy it new. All these skills would translate really well into running a government.

Balancing a tight budget would teach politicians why “penny pinching” is not a bad word. I’ve been cash-only throughout most of my adult life, like many of my peers in Colombia, since I wasn’t considered “credit-worthy” by banks. When living on my own there were hard decisions to make and I often counted down to the last cent, knowing that I’d need those coins for the bus fare to get to work.  I reworked budgets constantly, adapting to the current prices of food and transport and taxes. It was challenging, but it did give me the  opportunity to learn skills which will help me through life: I know how to budget, cut back on expenses, prioritize spending, compare shops for best value, and how to plan to save up for things I want or need, instead of spending money I don’t have. Imagine if governments were as careful with our tax money!

In their period  as an average person, politicians would also learn how to get out of debt responsibly. In Costa Rica I had friends whose spending got out of hand through misuse of credit cards, and they found that soon their paychecks were covering their wants but not their needs. Or perhaps a medical emergency or car problem pushed them into debt. When they found themselves in that situation, some of my friends cut expenses back to the basics, worked overtime and exchanged their social life for a second job to get back on their own financial feet. Other friends acted more like certain governments, where they just got a different card to pay off the ones they had already maxed out, and borrowed from friends and family until they couldn’t borrow more. Many governments are reaching this point, and some are even declaring bankruptcy, like the city of Detroit, in the USA has done. If politicians learned about debt as heads of households in an average family, perhaps they would make different decisions on a larger scale.

Austerity policies may work, but politicians should lead them by example: after their experience with average life, they’d know much more about budgeting, living with less, creative problem solving, the difference between wants and needs, getting out of debt and understanding how economic policies most affect those who earn least. They’d relate to the general population, understanding that cuts in research, health, education and welfare are not options unless they wish to harm the most vulnerable under their care. There is no one-size-fits-all solution, but knowing our leaders are practicing what they preach would go a long way to inspire the rest of us to follow through. When a government talks about tightening belts a notch… they should start by tightening their own belt, and lead by example.