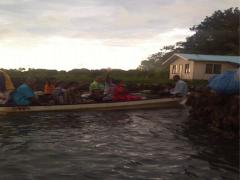 We all know that to get more, we need to spend more, and this is usually the way government expenditure works. But in Fiji it doesn’t really matter how much or how little the government spends, because whatever the amount might be, it doesn’t have a huge impact those communities already having a tough time.

People in Fiji are creative entrepreneurs who shift and adapt with the times. Many communities have had to do this for a long time with little or no government support.

Take Kevueli Tavanavesi, for instance, a farmer in a small village in Rewa. He says that it doesn’t make a difference if he receives government support or not because he gets his own funding from selling his own produce.  He plants watermelons, tomatoes, beans, and many other types of vegetables.  He is largely self- sufficient and relies on his own produce and what he earns himself.

Let’s consider this proposition for a moment. When you have less or are given less, you don’t want to waste what few resources you have. You make full use of what little you have for the very best results. But when you have abundant resources, you hardly ever think about scarcity and austerity is a word that doesn’t figure in your vocabulary.

Lave Robarobalevu, a farmer in Vunivaivai Village in Tailevu demonstrates how with fewer resources, you have to recylce and ultimately practice austerity on a daily basis.

Lave says that he had asked his sister for a loan to make use of land which was lying idle. He managed to plant 3,000 taro (root crops) on his land. He harvested the taro and sold them to his neighbours and also sold them to middle men who then sold them to market vendors for a higher price. With taro, the food crop is eaten but the stem can be replanted to produce more taro. He said that his village was always having big functions like weddings or funerals. During these occasions there would be a lot of taro stems left lying about and people would just throw them away. But he collected them and recycled them by replanting them on his farm. That’s how he got his first harvest of 3,000 taro.

It seems that when there is less government expenditure on a particular sector, that sector tends to work a little harder to increase its revenue an approach that seems to be working well in Fiji.

One island 20 minutes away from mainland Fiji has no electricity. Children have to travel daily by boat from the island to the mainland and then catch a bus to go to school, a trip that takes on average one and a half hours. Villagers that live on this island fish from the sea and farm the land for income and food. A lady who supports her family says she goes to the market to sell the fish and seafood she catches to provide for her children – to feed them, clothe them, shelter them and send them to school every day. She has a smile on her face when I see her selling in the markets. I guess I can say that I am sometimes really amazed by ordinary women who seem to do extraordinary things with what little they have.

Transporting children to school in Fiji. Photo taken by author.

People in small communities are not hugely impacted by the fluctuations in government spending. Many people living in towns and cities farm their backyards. Vegetables and food crops are just a few examples of the essentials that help them with their finances.  Some living in towns and cities have taken up farming as a hobby. They also know that they save a lot when they don’t have to buy from the markets. These are the people that try to fully utilize the limited resources they have at their disposal.

There is something to be said for working with the farm and within your means and working a little harder to be more creative with the resources you have without relying heavily on spending. Perhaps this is a lesson better told to governments, who can learn a great deal from small farming communities that understand that austerity is pretty much the only way of life in a world with limited resources.

I am from a small province called Tailevu in the Fiji Islands.