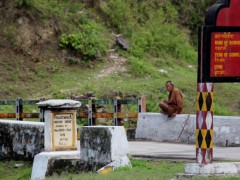 Can Bhutan include its most marginalized – the remote, rural populations? (BY Manny Fassihi NC SA CC 3.0)

In the span of a single generation, Bhutan has proven that its Gross National Happiness (GNH) approach to development can also lead to tangible GDP results. By managing its natural resources and unlocking its hydropower potential, the country has made impressive progress, enabling all segments of society to participate in, and benefit from,  the opportunities created by growth.

Average growth rates of 8.4% since the year 2000 have enabled the government to support the highest rate of poverty reduction in South Asia, cutting income-based poverty from 31.7% in 2003 to 11.5% in 2012. At the current rate the UN estimates that Bhutan will be able to graduate from its current  Least Developed Country status by 2021.

Steering Bhutan into remarkable growth throughout the years has been its series of five-year plans (FYP). These FYPs, the first of which was implemented in 1961, give an idea of the high priority the Government of Bhutan accords to sustainable and inclusive development (one of the pillars of GNH), putting Bhutan well on track to achieving Millennium Development Goals by the end of the 11th FYP (2018).

Yet for all these achievements, growth still remains narrowly based, vulnerable to shocks, and, most significantly, conducive to socio-economic inequality.

Nowadays poverty in Bhutan now has a rural face.  Ninety eight percent of those impoverished are rurally-based. As respective centres for commercial and government activity, Phuentsholing and Thimphu have received a disproportionate amount of investment in their infrastructures while rural areas – where the majority of the population abides – struggle to retain their young people, many of whom flock to urban areas in pursuit of an easier life. Urban per capita incomes are almost 4.5 times those of their rural counterparts. According to a recent study by the Asian Development Bank, the probability of being non-poor in Bhutan is greater in urban areas and less in the Eastern region where there is less access to electricity, piped water, and sanitation services.

This phenomenon is largely due to Bhutan’s harsh topography and the limited outreach of its domestic transport system. Approximately 21% of rural households have to walk 1-4 hours to reach the nearest all-seasons road while for another 21% this takes more than half a day.

The government has acknowledged as much in the 11th FYP and has drafted a Road Sector Master Plan 2027  (RSMP). The RSMP outlines the sector’s programs and approach to achieving strategic connectivity through construction of truck routes and includes expansion and maintenance of national highways, district roads, and feeder roads. In geographically challenged countries such as Bhutan, building a basic transport infrastructure plays a key role in promoting inclusion and reducing multi-dimensional poverty.

Furthermore, Bhutan’s growth has not generated sufficient employment for its growing class of educated youth. Many attribute this to the low quality of the education system. A recent assessment by the Royal Education Council (REC) confirmed a gap between actual and target status in terms of the quality of outcomes and processes.  Teachers are underprepared and teaching methods are old fashioned and inefficient; students perform below their grade levels, and on graduating lack the communication and analytical skills needed on the labor market.

The legacy of inadequate education is mirrored in Bhutan’s complex labor supply of young school leavers who can afford to stay at home, roam the streets of Thimphu, and search, almost exclusively, for white-collar jobs. Though the reported unemployment rate is low (2.1%) , this may be masked by the lack of social security, so that most adults do not have the option of not working – resulting in “under-employment”.  With many achievements having been made in terms of improved access to education, a major objective of the 11th FYP is now to increase the quality of service delivery.

Alongside quality education, the access to and the cost of finance remains a major hurdle for many low-income Bhutanese. Rurally based micro entrepreneurs and farmers, who form the bulk of Bhutan’s businesses (98%), consider the interest rates and collateral requirements for loans to be prohibitive, and turn instead to informal loans and credit which comprise 30% of the credit market. The Bhutan Development Finance Corporation, formed in 1988 to provide credit to agricultural populations, has not been able to meet financing needs of its borrowers – it provides credit to less than 20% of the sector’s 86,000 families.

Lack of entrepreneurial imagination is also regarded as a constraint. The majority of micro small and medium enterprises (MSMEs) are engaged in low-value and low-productivity investment such as handicrafts and incense which contribute very little to Bhutan’s total exports and lack diversification. The government is now formulating a strategy to incubate a wide-range of potential enterprises, address capacity constraints, and provide access to finance and loans for MSMEs.

Unlike his predecessor, Prime Minister Tobgay has taken an avowedly pragmatic approach to development. “There is no shortcut to growth,” he declared in a recent interview. While GNH remains at the core of Bhutan’s philosophy, the new government is not concerned with its theory but on dealing with many of these pressing issues and immediate constraints. Whether it achieves these aims or not depends on its ability to turn from being “master planners” to master implementers.