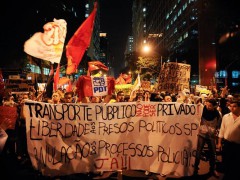 When discussing inclusive growth in Brazil, most economists interested in development focus on the central role played by the Bolsa Família  (Family Allowance) program in improving living standards among the country’s poorest. This program is now one of the most scrutinized social programs in the world, garnering international praise from development practitioners and winning a series of prestigious prizes. Most recently, the International Social Security Association gave it the Award for Outstanding Achievement in Social Security to mark the program’s tenth anniversary. In its current form Bolsa Família was established in 2003 and built on a number of formerly fragmented social policies to create a unified income supplement that reaches an estimated 50 million Brazilians.

Bolsa Família is what economists call a ‘conditional cash transfer program’. In other words, it is a scheme that provides its target population with a specific cash supplement, provided that the beneficiaries comply with a number of conditions. In this case, poor Brazilian families – overwhelmingly through the female family head – receive additional income upon submission of evidence that the children attend school regularly and are properly vaccinated.

As such, Bolsa Família supposes that the necessary infrastructure, like schools and hospitals, are readily available to its target audience. The program thus ties together a purely financial income transfer with more diversified development indicators in education and health – in what is seen as a model instance of the pursuit of inclusive growth for improved quality of life. In fact the program has been so successful that various initiatives have sprung up to replicate and adapt it to local circumstances in a number of other developing countries from Mexico to Morocco. And the International Social Security Association has dedicated a special paper to the analysis of Bolsa Família as an exemplary policy for developing countries.

Nevertheless, the program is far from being regarded with universal approval in Brazil itself.  There are several reasons to this – from concerns that it locks people in poverty to the ever-present specter of political clientelism. Indeed, there are debates now waging about whether this welfare policy is not actually eliminating incentives for people to take up work and business risks, while inculcating support for the current government among the program’s target audience.

In particular, over the past few months, the streets of cities across Brazil have witnessed the vocal discontent of the country’s emerging middle-class with what they see as the sheer lack of inclusive growth opportunities beyond the bare minimum provided by Bolsa Família. This emerging middle class is not poor enough to benefit from such social security policies, yet too poor to cash in on Brazil’s economic success which is often restricted to the wealthy and well connected. Consequently, social tensions have arisen and, in the turmoil of country-wide mass demonstrations, the next big question is steadily coming to the forefront: what will the government do to promote inclusive growth for those who have “graduated” from poverty into the middle class?

So far, the main demands from the burgeoning social movements in Brazil have been in terms of improvements to public services in transportation, healthcare and education, together with calls for a renewed pact against corruption across all spheres of government. These are all significantly harder goals to achieve, given that they require an actual revolution in the provision of public goods in Brazil and not just conditional cash transfers.

The ideas now being fermented include more efficient funding of public transport, citizen participation in definition of local public budgets as well as a reorganization of the police system to bring more transparency and reduce levels of police violence. Such demands can be interpreted not just as a sign of the Brazil’s long path to inclusive growth, but also – on a more optimistic note –  as evidence of its transition into a middle class country – a country in which a program like Bolsa Família still has its place in pockets of endemic poverty, but a country that must now also seriously ponder the next step forward in inclusive development policy.