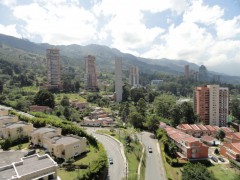 That’s right, add Medellín to the list of entrepreneurial hubs. The Colombian city was named 2013’s Innovative City of the Year by the Wall Street Journal magazine and Citi Bank, over any other cliché startup metropolis.

Talk to any paisa, a native of Medellín, and you’ll hear about the innovation moniker given to this mountainside city for its efforts to connect people and work.

“Connections create innovation,” reads the award, referring to municipal efforts and the egalitarian, connected environment the city is trying to create, in part to help attract the elusive startup culture.

The steps taken in the public and private sector to unite the city toward a business-friendly future seep through casual conversation and the city’s newer identity.

On my flight to Colombia, Lina Zuluaga, an editor of Colombian weekly Semana made sure that I understood how seriously Colombians took the award. “You should walk into a place in Medellín and greet people by saying, ‘You live in the land of innovation!’”

The sun rises on El Poblado, a wealthier neighborhood on the mountainside in Medellín. Photo by Jamie Stark.

The city may now be all business, but why might you know Medellín, The City of Eternal Spring? The green mountainside surrounding Medellín once housed the billion-dollar cocaine industry of Colombian Pablo Escobar in the 1970s and 80s.

“Definitely an entrepreneur,” says Alexander Tegelaars referring to Escobar. “He understood cocaine was going to be the next big product.” Tegelaars, who is Dutch and Italian by birth, has been living in South America for three years, and is currently interviewing at startups in Colombia and bartending at a hip local night spot.

Wearing a dark suit and walking out of an interview with a startup when I met him, Tegelaars represents the draw of the modernizing city: sleek, changing, and if all goes according to plan, soon full of profitable startups.

Escobar was killed in 1993, and Medellín has since struggled to rebuild its image. But in the way Buenos Aires has earned a reputation as an attractive tourist destination, Medellín’s year with the award is changing outward appearances.

Right on the money

The timing seems right for Colombia — even down to the url.

In the U.S. and elsewhere, .co is commonly considered an abbreviation for commercial, used for business websites. Colombia uses the same two letters for their online country code. Online and in the real world, Colombia means business.

“It’s easier for a small country,” Teeglers said. Although Colombia is arguably mid-sized, Teeglers has a point – Colombia has the opportunity to grow quickly and maintain the cool factor considered crucial in today’s Apple-inspired marketplace.

Colombia, propelled largely by Medellín, will not anytime soon be the world leader in tech startups. The country doesn’t need to be. The prize is to become the hub of regional innovation. Despite, or perhaps because of, its medium size, Colombia is well on its way to the top of the Latin American commercial region.

It was the municipal bureaucracy and not the business sector alone that helped win Medellín the Innovative City of the Year prize. The city government and its urban development plans deserve credit for the visionary innovation in the city.

“The winning city found new solutions to classic problems of mobility and environmental sustainability,” details the Wall Street Journal Magazine and Citi Bank award. “Today, gondolas and a giant escalator shuttle citizens from steep mountainside homes to jobs and schools in the valley below.”

Those gondolas connect people once cut off from Medellín by the drug-related violence of Pablo Escobar’s bloody reign. Today people cart down the northern Andes mountainside around Medellín to work at some of Colombia’s biggest companies, including government run energy giant EPM and chains like Exito superstores. Where drugs propelled the economy in the past, Medellín is now the corporate and commercial capital of Colombia.

But it’s the little guys attracting all the attention.

In a world abuzz about startups, a few are taking root just across the street from Hooters Medellín.

Giovanny Gomez, founder of four-man tech startup Gteksys, rents a desk and a safe for about $200 USD per month at El Espacio, a year-old startup co-working space, complete with a coffee machine, mini-fridge and glass-walled rooms for Skype meetings. He says the biggest benefit of living/working in El Espacio is the network.

In-house PR and design help investors invited as guests, and wayward journalists like yours truly popping in to interview Medellín’s tech intelligentsia.

The narrow space is mostly empty, about five startup employees tap-tap-tapping away on laptops. Consistent with tech startup trends, only one of the five is female. More jeans-wearing employees trickle in as the afternoon wanes, including Edinson Alberto Arrieta Aguas, who bursts in to the white and green offices with a grin and a bit of “#startuplife” swag.

Colombia has seen a handful of modern day successes. Alex Torre-Negra, from Bogotá, Colombia, founded VoiceBunny to simplify the process of finding voice actors. According to Arrieta, Torre-Negra is now a millionaire.

GrooveShark co-founder Andres Barreto, who lived in Colombia until he was 12, is perhaps the best-known Colombian in startups.

Entrepreneur is a word I heard in Medellín more than in most cities.

“It’s a cultural factor, the paisas,” says Tegelaars. He describes the paisa identification as deeply entrepreneurial and work-driven. “This goes back to the settling patterns in Antiochia,” referring to the Colombian department of which Medellín is the capital. “It was mainly first settled by Jewish and Basque – people who used to cultivate their own pieces of land instead of cultivating these massive fincas for large landowners.” History, including a penchant for entrepreneurism, is inseparable from the Medellín psyche.

Even in the heart of fast-paced startups here, things change slowly. A towering incubator and office building dedicated to tech and startups, called Ruta N, stands in the university neighborhood of Medellín. According to the stereotype, startup employees stay up working all night, while Ruta N follows a more traditional protocol and shuts off the lights at 5 p.m. Revolution hasn’t arrived when even symbols of change adhere to the old rules.

At the end of the day in Ruta N, stoic security guards give a polite goodbye and out you go into the park outside, teeming with families, little kids playing on the outdoor science exhibits built up around benches and trees.

Steps from the nearby planetarium, seven security guards inside, this reporter is swiftly robbed at knifepoint of his smart phone and cash.

It seems Medellín still has a long way to go.