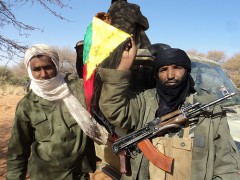 Earlier this year, Mali was a bastion of peace and stability in West Africa, boasting a 20-year legacy of democratic government. Today, its future could hardly be more uncertain. What began as rumblings of disquiet in its northern regions incited by the return of former Gaddafi mercenaries has resulted in an army coup and the subsequent occupation of the north by two rebel groups, the Azawad National Liberation Movement (MNLA) and Ansar Dine, or “Defenders of Faith”.

Ironically, the army seized power in protest of the previous government’s failure to curb the rebellion in the north. However, their actions ultimately provided the perfect distraction and gave the rebels the space to take full control. On May 26, the MNLA and Ansar Dine signed an accord to merge their groups, declaring the region under their combined control to be the independent Islamist Republic of Azawad, an area larger than France that spans two-thirds of the country.

Islamic rebel fighters. Photo by Maghrebia on Flickr. CC BY 2.0.

No Cause for Alarm

However, this recent merger should be no cause for alarm. It comes in the wake of historically poor relations between the two groups, which hold very separate objectives and ideologies. Ansar Dine claims to be fighting “a holy war”, seeks to impose strict sharia law and is allied with al-Qaeda in the Islamic Maghreb, while the MNLA is ardently secular and wishes to establish an independent Tuareg state.

The accord is thus an opportunistic gesture by both groups to consolidate their hold of the region. It has already caused friction within the MNLA as certain factions have categorically rejected Ansar Dine for its “fundamentalist tone”, which states that the new president’s principal mission is to protect religion and apply Islamic legislation. Meanwhile, on the ground, MNLA troops continue to fight with Ansar Dine for control of key cities, like Timbuktu.

With these divisions plaguing the rebels, taking back the north is not as much of a challenge as it might first appear. The Malian army is in tatters but it will receive ample outside support due to serious Western fears that its north might become a safe haven for al-Qaeda in the model of Yemen and Somalia. The African Union as well as several other nations have referred the issue to the Security Council in the coming weeks and requested an intervention force. France has already pledged its support for such a resolution. Moreover, more than 350,000 mostly Tuareg refugees have fled to neighboring countries, prompting regional actors to also support a resolution to the conflict. The West African organization ECOWAS has promised to send an armed force of 3,000, although no arrival date has been set.

In fact, the real challenge ahead for the Malian administration is to win back the trust of its people and ensure a smooth transition back to democratic government. There was little sign of condemnation of the coup from Malians, a sign that ordinary citizens were just as unhappy with deposed President Toure’s administration as the army. The appointment of former Parliamentary Speaker Diacounda Traore as interim President further fanned the flames, as he is part of the self-serving political elite that has ruled the country for years, and many have little faith in him.

The coup leader, US-trained officer Capt. Amadou Sanogo was pressured into stepping down after only three weeks in control, but he still wields enormous power behind the scenes. This was made especially clear on May 21, 2012 when protesters entered the presidential palace and violently attacked interim President Traore. They were demonstrating against the recent ECOWAS-brokered agreement to extend his tenure for a full year, and calling instead for Sanogo to head the interim government.

Soldiers guarding the palace apparently allowed the crowd to enter, raising suspicions that Sanogo had tacitly orchestrated or at least encouraged the incident to bolster support for his return to power. This is despite the fact that, under the agreement, he was recognized as a former head of state and given a pension, mansion and car in exchange for his retirement from politics. Traore was flown to Paris for medical treatment and although he was supposed to return within a week, remained abroad for longer. Interim Prime Minister Cheick Modibo Diarra is now in charge but has little political support or power.

Winning back the north is by no means an easy task, but Mali will have plenty of help in this mission from both regional and international actors. However, with respect to its serious internal social and political problems, it is on its own and unprepared. It only took a few days to collapse the government, but it may take years to rebuild and revive the nation.

Temisan Boyo is a member of Global21, a student network of international affairs magazines and a partner of FutureChallenges.