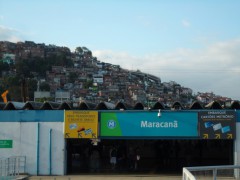 The idea that the World Cup should lead not only to short-term celebration, but also provide a “legacy“ to its host country, has been central to the upcoming 2014 games in Brazil. Such legacy typically refers to the substantial investment necessary to improve the country’s infrastructure, both specialized (high quality and safe stadiums) and more general (including roads and airports). The government is understood to lead the investment strategy and is held responsible for ensuring that it translates into a legacy. As such, once the games are over, it will have to face scrutiny not only of Fifa, but also of its citizens. Foreseeing such demands, the government has repeatedly stressed the relevance of the legacy, against a backdrop of increasing discontent with the way it is conducting investments ahead of the World Cup. There are records of specialized infrastructure that have little to offer to the general population, while the highly-anticipated improvement of public goods such as transports remains in ink and paper – all of this at a financial cost that has earned the games the title of one of the most expensive World Cup editions of all times.

As a resident of São Paulo, the Brazilian city emblematic of the country’s emerging middle class, I have become used to witnessing radical demonstrations against the World Cup altogether. Young people, many of them covering their faces, chant their slogan in unison: “não vai ter Copa“ (“there will be no World Cup“). Even those who do not participate directly in street demonstrations are quick to voice their frustration with an event that is believed to crystallize the country’s passion for soccer and managerial inefficiency. The idea of a relevant legacy is met with a mix of incredulity and cynicism: the anticipated public goods and economic dynamism are nowhere to be seen. Citizens feel that their voices have not been heard; and instead of growing resigned, the rhythm of visible and potentially disrupting demonstrations is quickening.

Demonstration against the World Cup in São Paulo.. Photo published by Flickr user Melca Medeiros under a CC BY 2.0 license.

However, what if the very legacy of the 2014 World Cup came to be this new culture of social demand? Last year, when demonstrations arose in São Paulo and elsewhere, media observers were quick to recall that Brazilian civil society was typically unwilling to engage with such visible action. And yet, the specific demands regarding transportation costs soon grew into a multi-headed movement of wide (and sometimes inconsistent) criticism of the current state of Brazil. The protests waned progressively, appearing to close an exciting episode in the recent history of civil society in the country. The demonstrations against the World Cup, nevertheless, have kept the torch burning, effectively cementing a culture of civil action and social demand in Brazil.  Where the very nature of such demands is debatable (and arguably irresponsible), few believers in democracy fail to view this as an essential step in Brazil’s path to inclusive development and democracy.

The upcoming October 2014 elections represent the ultimate democratic test to the consistency of the World Cup’s social legacy. One can only hope that Brazil’s maturing civil society’s vote will sanction effective and representative policy-making.