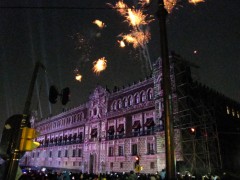 Mexican democracy is alive, but the nature of its own sickness has made us all question whether it is working appropriately. Corruption, in addition to an oligarchic unequal society defending individual interests over plural ones and spurring continuous conflict, has undermined the evolution of Mexican democracy and have created a huge degree of confusion among the people.

Institutionalizing plural choice in Mexico took nearly 2 centuries – 90 years of battles and another 90 years to refine the details and become a truly democratic nation. Nevertheless, it seems that we have missed one step on the process: forming honest and responsible leaders that truly represent the numerous weaker classes and ensure transparency, thus achieving legitimacy and effectiveness on the system.

What Mexico is experiencing in 2012 is either an apparent rollback on the achieved democratic development or in the very least the nation’s citizens’ loss of confidence in the country’s institutions. Winston Churchill once mentioned, “It has been said that democracy is the worst form of government except all the others that have been tried.” It is for this reason that we must try to regain both the confidence and legitimacy of our system based on the best options available.

What led to this crisis? Many Mexicans consider the 2006 presidential elections between Felipe Calderón and Andrés Manuel López Obrador (AMLO) to have been flawed. As a result, AMLO organized a movement devoted to deny recognition to the “spurious president” and position himself –within his followers– as the real and only one. Fortunately, this movement didn’t lead to a worse scenario; the IFE acceded to recount the votes and finally reaffirmed the legitimacy of the elections.

Six years later, the opinion is once again divided on the recent 2012 presidential elections. On one hand, there is a set of supporters for AMLO that claimed the elections were once again flawed against him, and on the other hand, others believe the elections fairly and legitimately proved defeat of this candidate.

The accusations made by left-wing AMLO argued that the winner, president-elect Enrique Peña Nieto, cheated. Their argument is that Nieto had the support of the media, arranged the polls to create a self-fulfilling prophecy and gave one cow, three pigs, two ducks –of course there were lots of jokes about the animals–, and 1000 pesos Soriana (a well-known supermarket) giftcards in exchange for votes.

Along with the current corruption, insecurity, and inequality issues, the recent accusations made by the left-wing have decreased the confidence of the people in their institutions. Consequently, there has been an outstanding increase in the amount of popular participation. The popular sector, tired of being subject to the corruption of the political class, has joined to the newly created active groups such as “Yo soy #132” and its crusade for democracy on the media and other structural changes.

Even though these civil groups invited everyone to supervise the counting of the votes and a fair trial was made for judging the previously mentioned electoral accusations made by AMLO´s group, there is still a huge amount of the population that considers the process a failure.

Be it only as an effect of fanaticism, underground interests moving masses, as a complaint for the injustice of the general structure or a legitimate demand for democracy, the fragile Mexican political balance is in danger of being destabilized.

While the press, the government, and civil groups all voice their own perceptions, the current situation in the country has driven voters to ask for something different and have inevitably begun fighting amongst themselves.

Recently AMLO invited the people to civil disobedience and created his own party, but what he should really do is to encourage open and real dialogue between parties. He must actively scrutinize the institutions instead of undermining their legitimacy between people that day by day get even more bored and leave his movement hopeless.

What really matters is that all the proposals made by the “Yo soy #132” organization along with the new left-wing party serve as a guide and eventually as checks and balances to gradually incorporate the claims of a desperate proportion of the population crying for equality and renovation.

Today Mexico is living on a time bomb and there are two options: either work hard on what we already have, or lose all the progress and take the risk of falling into a radical change that could lead us to what Fareed Zakaria theorized on his Foreign Affairs article “The Rise of Illiberal Democracy”.

It is time to regain confidence in Mexico’s people, and to repair the structural claims demanded by an unequal population that cannot experience the real benefits of a democratic system, as democracy implies not just elections, but also collective choice. When a major sector of the population demands is unattended, it means that now is time for democracy to either take a step forward and recover credibility or disappear. It is time to determine whether the Mexican Democracy will find a cure for its illness and remain alive.

This picture taken by Daniel Kapellmann in 2010 shows the Executive Palace illuminated for the celebration of 200 years of the independence and 100 after the revolution.